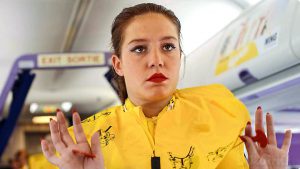 It takes about 40 minutes for the protagonist’s name to even be mentioned in Zero Fu*ks Given (Rien à foutre), the deeply empathetic and human feature from co-directors Julie Lecoustre and Emmanuel Marre. Remarkably, this is the former’s debut in the director’s chair; for the latter, it is the third time. I’m not sure what’s more impressive: That, or Adèle Exarchopoulos’ performance here. The French actor appears in almost every single scene of Rien à foutre (I’m going to keep using the original title because the English one hints at a degree of flippancy that feels inaccurate and inappropriate), playing a low-cost airline flight attendant who uses her job and its unique patterns of travel and displacement to run away from grief and responsibility. Exarchopoulos, who rose to international attention with a similarly brilliant performance in Blue Is The Warmest Colour (a mostly excellent, if ethically questionable, production), really is a sight to behold here, the camera often tight on her features over extended periods. Her skill is matched by a natural script and subtly beautiful cinematography in a film that deserves a much wider audience than it will likely get in today’s market.

With its social realist grounding and compelling character drama—as well as its overall quality—Rien à foutre calls to mind the work of Belgium’s Dardenne brothers, whose Two Days, One Night was one of the best films of the last decade. In that heart-rending film, we followed Marion Cottilard’s factory worker as she fought valiantly to keep her job by appealing to her co-workers’ sense of solidarity. In Rien à foutre, we have leaped forward in time: There might be just an eight-year gap between the two films, but the accelerated timeline of capitalist working conditions is plain to see. We only find out our protagonist’s name—it’s Cassandra—when her job is about to vanish from under her feet, the news delivered in the anodyne, ruthless language so prevalent in modern corporate environments: ‘Unfortunately, I just can’t give you another solution’—what an incredible way to tell someone they’re fired! It’s not that Two Days, One Night didn’t acknowledge the precarity of contemporary capitalism. Far from it. But there was a sense there that maybe things could be better. In Rien à foutre, the picture is bleaker. Cassandra seeks to dissolve herself in the workplace, her anonymity a function of both her own (admittedly grief-driven) volition and the dynamics of employment under capitalism in the twenty-first century. Cassandra wants to reduce herself to no one. Capitalism is more than ready to provide. At one point, we see Cassandra and her colleagues cross a picket line while a union is undergoing a continent-wide strike for better conditions. On their way to catch a plane, they hear the (tellingly all older—they will remember earlier days when organised labour had more power) striking workers out, and while they sympathise with their message, the balance is clear in their heads: They need to take their shift; they can’t afford to miss work; they don’t even see how a slightly better world might be possible. As Cassandra explicitly says to the strikers: ‘I don’t really believe in change.’

Lest this all makes the film sound too depressing to enjoy, rest assured it’s anything but. Julie Lecoustre and Emmanuel Marre have structured their film into two distinct parts. The first follows Cassandra at her job, while the latter sees her returning home to her father and sister. As well as introducing us to Cassandra and immersing us in her work-life rhythms—fly, smoke, drink, party, flirt, fly again—the first part serves as a fascinating, kinetic, witty, and compassionate account of the work of flight attendants. Films and stories in which air travel features are a dime a dozen, but Rien à foutre is one of only a handful I can think of that take an interest in the other side of the divide—in those people who make our indulgences even possible, and how they get treated, by us as well as by their employers. The film changes setting and with it pace quite abruptly and dramatically when Cassandra returns home. Up until this point, we see only hints of a back story or family life—though we are made aware of one element that must be playing a big part in Cassandra’s mental state: Her mother’s tragic death in a car accident a few years back. At home, we see how what remains of her immediate family are dealing with the fallout of that event. The shift in storytelling rhythm and location texture at first feels slightly jarring, but you soon come to see that it echoes Cassandra’s mental state upon returning home—which for her means confronting a deep trauma. Depressurization and acclimatization can be difficult at the best of times, let alone when dealing with bereavement. Even in this latter part, however, Rien à foutre remains a pleasure to watch, as from start to finish the film exudes warmth, empathy, and humour—all while being filmed in a natural and unforced way that remains strikingly pleasing to behold throughout. There are some gorgeous, thematically rich compositions here. This might be an at-times painfully gruelling depiction of someone caught between the crushing gears of grief and modern capitalism, but Julie Lecoustre and Emmanuel Marre have imbued it with the life-affirming energy that runs through the best of cinema. See it if you can.