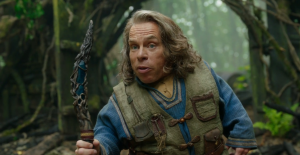 Lucasfilm may have been spending most of their time in a galaxy far, far away with the continued, astronomic success of Star Wars and are also set to return to the archeological adventures of Indiana Jones, but there was once a time when Lucasfilm dipped their toes into the fantasy genre with Willow. Written by George Lucas himself and directed by a still young and fresh Ron Howard, Willow wasn’t a huge box office smash, at least as compared to its older siblings in Star Wars and Indiana Jones. That lack of unprecedented success is probably why Lucasfilm hasn’t touched the IP since it premiered in 1988, but it has enjoyed the luxuries of being a cult classic that has maintained a dedicated following since its release.

After Willow Ufgood completed his quest in the original film, many fans understandably expected that was the end of his story, and it was unlikely that we’d see him again. Yet, lo and behold, Willow is back for an all-new adventure, with a new Disney+ series set to continue his journey with new heroes, and new villains, but the same lovable character fans know and love with the one and only Warwick Davis returning to the role. Though the 34-year hiatus has certainly been a long one, it’s not going to last much longer, so here is everything we know so far about Willow’s triumphant return.

Watch the Willow Trailer
Even though it’s all about Star Wars this weekend with Star Wars Celebration bringing in quite a few announcements for the sci-fi galaxy, Lucasfilm took a bit of time to highlight Willow by dropping the first trailer. In typical Lucasfilm marketing fashion, the trailer doesn’t reveal too much about the story. Instead, it showcases a quick sizzle real of the new characters joining this fantastical world, while reintroducing older characters we know and love, namely Joanne Whalley returning to the role of Shorsha, and of course, a big spotlight on Warwick Davis as an older, wiser Willow Ufgood who has become much more adept in the art of magic and spell casting. All of this paired with that classic, iconic theme composed all those years ago by the late great James Horner.

The second trailer for Willow premiered on September 10, 2022, during a presentation at D23. The trailer gives us a better look at the plot of the series as Kit, the daughter of Sorsha, recruits Willow, on her quest to save her twin brother. The spot also gives a glimpse at some of the forces of evil and danger that our heroes will face over the course of the series.

When and Where is the Willow Series Releasing?
Willow, being a Lucasfilm property, will be making its debut under the banner of its parent company with Disney+. The eight-episode series officially begins on Wednesday, November 30, 2022, with subsequent episodes coming out every following Wednesday.

What Is the Plot of the Willow Series?
In the original film, Willow embarked on a quest to deliver a young child he found near his village, and protect her from an evil sorceress who wished her harm. Willow found himself in completely foreign territory, having rarely ever left his small hometown. His journey is littered with vile monsters and wretched servants of the evil Empress Bavmorda, but Willow also meets a troupe of lifelong friends who assist him in the journey, such as the arrogant yet lovable swordsman Madmartigan. Difficult as these trials may have been, Willow ultimately prevailed in his quest and protected the young child, before returning to his home with a new love and appreciation for studying magic.

Details on Willow’s next adventure are admittedly still pretty slim, but we do know that he’ll still be the selflessly lovable hero he was in the film. The trailer indicates that the once-novice magician has honed and perfected his craft quite significantly, carrying himself with some real class and bravado despite remaining humble. The show is confirmed to take place several decades after the events of the movie, where Willow is now assisting a young woman named Kit to find her kidnaped brother, and now the two as well as their small band of companions set out on a new epic quest.

Who Is Making the Willow Series?
Though Ron Howard will not be returning to the director’s chair for the Willow series, he will still be attached to executive produce the series alongside Lucasfilm regulars Kathleen Kennedy and Jonathan Kasdan. Kasdan, who worked extensively with Howard and has been a co-writer on Solo: A Star Wars Story, will also be leading the charge as the project’s showrunner. Kasdan is also credited with being a screenwriter for the show alongside John Bickerstaff (Grounded) and Hannah Friedman (Obi-Wan Kenobi).

Jon M. Chu, best known for Crazy Rich Asians and In The Heights was initially attached to be the director for the series but has since chosen to drop out due to timing conflicts. Now directing duties will be fulfilled by Stephen Woolfenden (Outlander), Jamie Childs (His Dark Materials), and Debs Paterson (A Discovery of Witches).

Who Is in the Cast of the Willow Series?
As mentioned several times above, Willow simply wouldn’t be Willow without the person who brought the beloved character to life in the first place. Warwick Davis was first introduced to Lucasfilm when he brought to life Wicket in Return of the Jedi and has since had at least a cameo appearance in almost every Star Wars film since. After a prestigious career of smaller roles, Davis was finally given his chance to become a leading man in a major high-budget project with Willow. Given Davis’s professed love for the role over the years and his praise for the film’s portrayal of people with dwarfism, it makes perfect sense that he would return.

Davis isn’t the only cast member returning, as Joanne Whalley will also be reprising her role as Sorsha, the once-antagonistic daughter of Bavmorda turned staunch ally and protector of the child Willow was transporting. This gives quite a few hints as to where the story could go, as both Sorsha and Madmartigan vowed to raise and care for the child to give her the life she deserved. Unfortunately, Whalley’s on-screen love interest and off-screen ex-husband Val Kilmer will not be amongst the returning cast, but both Whalley and Kasdan confirmed at their Celebration panel that Kilmer’s fan-favorite Madmartigan would have a constant presence throughout the series and that Kilmer fully supported the series.

The rest of the cast is rounded out with some new faces who will become the new heroes of the world of Willow. These names include Erin Kellyman (Solo: A Star Wars Story) as Jade a knight in training, Rosabell Laurenti Sellers (Game of Thrones), Tony Revolori (Spider-Man: Homecoming), Ellie Bamber (The Nutcracker and the Four Realms) as Dove, Dempsey Bryk (Black Mirror), Ruby Cruz (Mare of Easttown) as Kit, Sorsha’s daughter, Amar Chadha-Patel (The Third Day) as Boorman, a thief, and Talisa Garcia (Baptiste), who will be making history as the first openly transgender actor to be cast in a Lucasfilm project.

Also joining the series is Christian Slater (Mr. Robot) in an undisclosed role that is said to be connected to Madmartigan, and Ralph Ineson (The Green Knight) as Commander Ballontine.