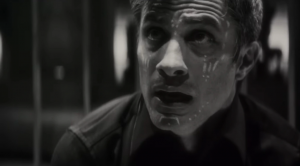 Werewolf by Night is the most distinct entry in the Marvel Cinematic Universe that we’ve seen in many years. Although shows like WandaVision and Loki have taken the MCU in a wilder and weirder direction, the first “Special Presentation” on Disney+ was shot to resemble a 1930s black-and-white monster movie. At 53 minutes, Werewolf by Night is one of the few recent MCU projects that left audiences wanting more when it was over.

Jack’ Russell’s (Gael Garcia Bernal) signature tattoos are revealed to be a way of honoring his ancestors; the same distinguishable markings are seen on his werewolf body. Although Werewolf by Night previewed some of Jack’s abilities once he turned into a werewolf, there weren’t a lot of details revealed about his origin story. However, the unusual markings on Jack’s face provide a few details about how he was transformed into the fearsome creature in the comics.

Although the future of Werewolf by Night hasn’t been revealed, Kevin Feige has teased that it will be “quite important” in the MCU moving forward. Although the emergence of the Bloodstone suggests that more horror-themed characters might be entering the Multiverse, this hopefully won’t be the last time we see Jack Russell. Bernal’s performance as the titular anti-hero “Werewolf by Night” certainly ranks among the best casting decisions that Marvel has made in recent memory.

Who is Jack Russell?
A character identified as “Werewolf by Night” first appeared in a 1953 issue of Atlas Comics’ Marvel Tales #116, but the creation of the Comics Code Authority in 1954 prevented more horror-centric creatures from appearing in Marvel’s stories. After the rules were updated in 1971, a new version of Werewolf by Night appeared in 1972’s Marvel Spotlight #2. His alter-ego, Jack Russell, was distinct among Marvel heroes at the time because of his connection to classic monsters like Dracula.

Jack was born with the name Jacob Russoff in Medias, Transylvania. Jacob’s ancestor, Grigori, was cursed with lycanthropy in 1795 when he was bitten by a werewolf working for Dracula; Grigori had attempted to track down Dracula to avenge his wife. Jack’s father, Gregor, reactivated the family cure in the 1950s when he read from the pages of the Darkhold. While Gregor was killed by an angry mob, his wife Laura was able to move her children to America, where she married Phillip Russell.

Jack was struck with the familial curse when he was a teenager, but he eventually learned to master his abilities. The character later appeared in 1974’s Giant Sized-Creatures #1, but he was revamped and reintroduced in a 1983 issue of Moon Knight. He continued to guest-star in installments of Doctor Strange, Morbius, Spider-Man, and the West Coast Avengers in the 1990s.

Jack Russell’s Tattoo
Jack Russell has a tattoo of a howling moon on his head and an eerie symbol of a full moon on his chest. Although Jack was first cursed with lycanthropy on the eve of his 18th birthday, he locked himself up during nights to prevent himself from hunting during the full moon. A group of powerful beings known as “The Three Who Are All” granted Jack with the ability to be conscious in werewolf form. Unfortunately, Jack wasn’t able to subdue his impulses during the full moon, which led to conflicts with Iron Man and the West Coast Avengers.

Jack earned his tattoos after a devil-worshiping cult led by Schuyler Belial tried to sacrifice him for a satanic hunt. The cult believed that they could gain Jack’s abilities by transfusing werewolf blood. Although Jack was ultimately able to escape the cult with the help of Moon Knight, he was forced to bear the tattoos for the rest of his life. They serve as a reminder to Jack that there will always be villains who would relish the opportunity to take his powers.

Jack’s werewolf form is activated when Verussa locks him in a cage and uses the Bloodstone to startle him. To her surprise, Jack escapes confinement. He recognizes Verussa’s estranged daughter, Elsa (Laura Donnelly), during his rampage and spares her life before fleeing the manor. A confused Jack wakes up the next day as a human in the surrounding forest next to Ted/Man-Thing (Carey Jones).