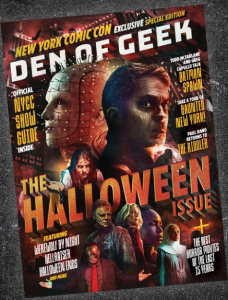 Den of Geek is celebrating “Spooky Season” in its home city at New York Comic Con. To mark the occasion and kick-off a month of Halloween and horror-related content at DenofGeek.com, Den of Geek is proud to present its exclusive New York Comic Con print issue, with a cover that celebrates new horror offerings from Marvel, NBCUniversal, Hulu, and more.

Den of Geek has partnered with ReedPop, the event company behind New York Comic Con, to produce the official New York Comic Con show guide, which is featured inside the issue and distributed to show attendees at the Javits Center from October 6-9. This year’s NYCC magazine is bursting at the seams with horror articles, spotlighting cover stars Werewolf by Night, Michael Myers, Pinhead, and more haunting the cover designed by artist Neil Jameison.

Readers will find engrossing looks at some of the biggest entertainment properties of the year. Composer-turned-director Michael Giacchino gives us all of the gory details about Marvel’s Halloween special, Werewolf by Night, touching on his deep appreciation for practical effects and classic monster movies. The fall movie preview highlights all of the can’t-miss releases hitting cinemas this fall, including a look at the final confrontation between Michael Myers and Jaime Lee Curtis’ Laurie Strode in Halloween Ends. Further, director David Bruckner gives us a sneak peek at his Hellraiser reimagining for Hulu, including why horror icon Pinhead might look a little different this time around.

The issue also includes a candid chat with comic icons Todd McFarlane and Greg Capullo ahead of their Batman Spawn crossover event, as well as an interview with actor Paul Dano, who’s recent turn as The Riddler in Matt Reeves’ The Batman inspired him to continue exploring the character through the pages of a brand-new comic book. As always, Den of Geek provides an official NYCC show guide so attendees can stay in the loop with the very best that the convention has to offer, and for those traveling to New York specifically for NYCC, you’ll be treated to some spooky sightseeing courtesy of our Haunted New York tour guide. Still not scared? Well, follow along as we rank the best horror movies of the last 15 years in honor of our 15th anniversary!

Throughout the scariest month of the year, Den of Geek celebrates all things that go bump in the night. Horror fans can expect retrospectives with original reporting, interviews with legends of the genre, best lists, round ups, fun listicles, and more covering everything creepy in film, TV, games, comics, and books.

Beyond DenofGeek.com, the brand will be hosting in-person events throughout October to celebrate Spooky Season. Den of Geek is thrilled to partner with Ethereal Horror Fest, Phantom Fest ATX, Brooklyn Horror Fest, and the filmmakers behind the original horror film Bitch Ass (SXSW Audience Award Winner) to host their NYC premiere. See below for the full events calendar.

About Den of Geek:

Celebrating its 15th anniversary, Den of Geek is a recognized authority on movies, television, games, comics, books, and culture since its inception in 2007. Reaching 11 million users each month, DenofGeek.com is the ultimate community for entertainment fans. Den of Geek magazine was established in 2015 and new issues are released quarterly. Limited copies are available for free at the comic shops and retailers in the Den of Geek Comic Shop Network. Please visit our subscription page for more information on how to sign up to receive future issues. Join the year-long 15th anniversary celebration by visiting DenofGeek.com.