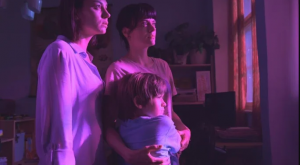 Director Cristina Grosan’s Ordinary Failures (Bezna Selhani) follows three people dealing with everyday problems against the backdrop of impending doom. Written by Klára Vlasáková, is about getting out of your head and experiencing the world in the present before it passes you by (or no longer exists). At first, the plot is confusing, but it eventually comes together in a satisfying (yet bleak) way.

The film starts with a bang–literally. There is an unexplained underground explosion in the city center, fires sparking out of thin air, electronics going kaput, and blackouts. These incidents are happening all over the place, and it’s starting to escalate. Hana (Tatjana Medvecká), an older widow, trying to move on after her husband’s death, is laid off from her job due to ageism. He leaves behind a furry companion named Arlo, that suddenly shuts down. Hana takes it to the mall to be serviced, and that’s when she runs into Tereza (Nora Klimesová), a teenage loner who has a strained relationship with her parents and is at the pet store looking for milk to feed her kittens.

The power in the entire shopping center goes out, and as Tereza hits the staircase to leave, she sees David (Adam Berka) sitting alone. The youngster is waiting for his Mother, Silva (Beata Kanokova), to rescue him. Why did she leave him there alone, though? David is disrespectful to his mom and likes to fight his classmates. This is too much for Silva to handle as she works to keep a nervous breakdown at bay. Deep down, Silva resented being a parent and dropped him off at a playroom so she could catch a break. She must travel through the fray to find her child when the city starts descending into chaos.

In Ordinary Failures, the audience watches the slow decline of society while putting the onus on them to think about how they would reconcile their life as disaster looms over them and what happens when there is nothing they can do to stop it. The script centers on three women dealing with isolation, adolescence, and Motherhood. These three concepts that initially caused hardship to the characters end up helping resolve what plagues them. The three finally get their lives together as the world goes to crap and are somehow relaxed amidst all this.

The film isn’t dialogue-heavy, and much of the emotions experienced are left unsaid. Vlasáková’s script gets inside the head of the three women. The women don’t have to say anything–the audience can see and feel it. The meditative nature of their struggle is relatable, dare I say, ordinary. The movie is not just about mother nature running amok, but what happens when things around you fall apart and you have a bunch of unresolved baggage. Will it still be as important when you’re running out of time on Earth? Normalcy and what’s familiar bring comfort to people in crisis, and your ordinary failures are insignificant compared to the world’s fate.