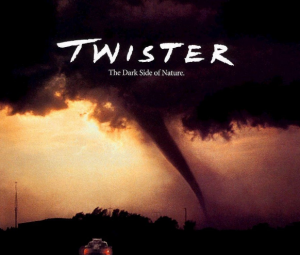 Don’t look back… Twisters is about to head into production. According to Deadline, the upcoming Twister sequel is currently meeting with directors as Universal and Amblin hope for a spring start.

The original disaster flick was released way back in 1996 and starred Bill Paxton, Helen Hunt, and Cary Elwes as storm-chasers on the trail of a severe tornado outbreak in Oklahoma.

Frank Marshall is set to produce the upcoming sequel.

Twister was received well by audiences and critics, so perhaps a sequel was inevitable.

IGN’s Twister review gave it 7/10 and said: “Twister is probably known far and wide as the movie that jump-started the disaster movie genre. If nothing else, it certainly pioneered nearly every aspect you see in disaster movies today. Heavy-duty special effects to portray the environmental menace du jour, a paper-thin plot to link all the big disaster scenes together, the good scientists vs. the evil scientists, etc. etc. etc. Hell, it even pioneered the copy-cat movie released near the same time: Tornado on Fox, starring Bruce Campbell. We might have moved on to Global Warming and Alien Invasion in the last several years, but nothing says ‘disaster nostalgia’ like a hurricane tossing livestock through your living room window.”

Of course, a Twister reboot has been in the works since 2020 but little is known about the film.

However, it’s said that filmmaker Steven Spielberg was pretty impressed by the Twisters script from The Revenant writer Mark L. Smith, resulting in the sequel being fast-tracked.

Top Gun: Maverick director Joseph Kosinski was said to be directing the film but was forced to pull out after committing to the upcoming Brad Pitt Formula One movie at Apple. As it stands, the film is still lacking a director, but there are apparently several names in the mix to take over.

Dan Trachtenberg, who helmed 10 Cloverfield Lane, is up for consideration alongside Free Solo duo Jimmy Chin & Elizabeth Chai Vaserhelyi. Missing Link and Kubo director Travis Knight is also in the mix along with “one or two others”.

Universal and Warner Bros. reportedly hope to bring back Helen Hunt for the sequel, with a drama that “focuses on the daughter she had with the character played by the late Bill Paxton”. The idea is that Hunt’s daughter has “caught the storm chasing bug” of her parents.

Want to read more about Twister? Check out the top 10 disaster movies ever made and find out which were the quickest franchise reboots.