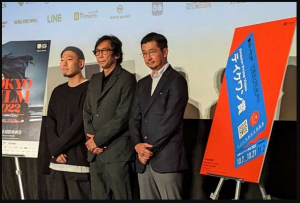 After a red carpet parade lasting nearly two-hours, the opening ceremony for the 2022 Tokyo International Film Festival kicked off with a musical number performed by four women from the Takarazuka all-female theater troupe in black men’s suits. There is over 100 years of tradition behind Takarazuka-style performances, in which women play men’s roles. But if there was a metaphor for the changes wrought on the festival by two years of COVID disruptions or on Japanese entertainment by the beginnings of the #MeToo Movement, it was not clear what it was.

Rather the opening ceremony was making use of the Takarazuka Theater next door to the hyper-modern Hibiya Midtown complex which has been adopted by the festival since last year, after a move to Ginza and Hibiya from the Roppongi district.

After the Takarazuka, it was the turn of Japanese Prime Minister to give the proceedings some gravity. Still on a trip to Australia, Kishida Fumio beamed in a video message about the city’s embrace of the in-person 35th edition. “Film has the power to restore hope and joy to those impacted by COVID,” Kishida said.

The festival itself seems largely restored. Though behind the scenes organizers have spoken of budget restrictions, the festival has a contingent of 190 movies and has brought back foreign filmmakers, talent and media, ensuring that the 35th edition is larger and more diverse than the 2021 event, the first in Hibiya. Interviewed earlier by Variety, festival chairman Ando Hiroyasu spoke bullishly about the festival’s transformation.

“Japanese movies are ready to make a leap forward into the world,” said festival ambassador, actor Hashimoto Ai, speaking from the stage. That’s a bold statement considering that Japanese filmmakers and government officials spend much time looking over their shoulders at the global success of film and TV makers from neighboring Korea.

But it may be borne out both within the festival – its lineup is bulging with Japanese titles, many world premieres – and outside.

Global streamers Netflix, Disney+ and Amazon are all paying increased attention to Japanese content creation. (Amazon runs a short film competition in partnership with the festival.) And box office has bounced back more strongly than in Japan than in many other Asian markets. On Monday, Toei Animation revised upwards its 2022 profit forecasts thanks to the success of its “One Piece” and “Dragon Ball” titles.

And the flood of praise and prizes for “Drive My Car,” the three-hour drama by Hamaguchi Ryusuke, culminating in its win of a Best International Feature Film Oscar, shows that Japanese films, even made by talent hitherto little known internationally, can compete with the world’s best.

Celebrated U.S. filmmaker, Julie Taymor took to the stage as president of the jury that will decide the competition section prizes. “The film festival and film itself is the place where we honor creativity and imagination and the things that keep us together as one,” she said. “So we are excited to experience the films that have come from all over the world and have the experience of people and places we don’t know and therefore we can have some empathy, which is what we need as human beings.”