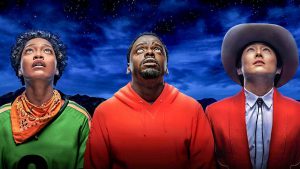 In Barbarian, Nope, and Crimes of the Future, what terrifies us most is just another side hustle.

Living under capitalism means considering how every experience, good or bad, can be turned into content. This is different than, but not always distinguishable from, mining our experience for art. Humans have always had the impulse to create, and that impulse has often been bent toward the ends of commerce. That has, arguably, never been more true than it is right now.

Three of 2022’s best horror films, Nope, Crimes of the Future, and Barbarian, are engaged with this impulse.

In Nope, Jordan Peele’s big-budget follow-up to Us and Get Out, this commodification of the self is localized to Hollywood. Early on, O.J. (Daniel Kaluuya) and Emerald’s (Keke Palmer) father Otis Sr. (Keith David) is killed when a coin falls from the sky, pierces his skull, and lodges in his brain. Though the official answer is that a prop plane was responsible for the debris, O.J. isn’t satisfied, and soon the siblings find that an alien monster shaped like a UFO is living in the mountains outside their horse ranch. O.J. and Em, like their father before them, are in the movie business (“the only Black-owned horse trainers in Hollywood”), but their craft has largely been replaced by CGI. To stay afloat, they set out to get the “Oprah shot,” footage of the creature that would be unfakeable and undeniably alien.

Nearby, Ricky “Jupe” Park (Steven Yeun) runs a Western-themed amusement park, where he puts on dangerous shows, sacrificing horses he buys from O.J. to the creature in the sky for a cheering crowd. Jupe was a sitcom star as a kid, but his chimpanzee-starring series was canceled after the primate killed or maimed the rest of the cast after being startled by an exploding birthday balloon.

Jupe has turned his childhood trauma into a public persona, smiling the entire time he explains the SNL sketch of the incident to Em, allowing the parody to stand in for his own experience. Jupe is so inextricably linked to the public presentation of himself, that he explains his own personal history through a third-party’s mocking interpretation.

Crimes of the Future, likewise, centers on a character who takes the horror of his life and monetizes it. In a vague near future, Viggo Mortensen’s Saul Tenser has a rare condition which causes his body to endlessly produce new and novel organs. This process could kill Tenser if left unchecked. So, with his partner Caprice, he turns these operations into a voyeuristic stage show, inviting audiences to watch as Caprice pilots a rig of whirring knives which slice his flesh and excavate the tissue. In Crimes of the Future’s world, “surgery is the new sex” as epigramed by Kristen Stewart’s Timlin, a member of the bureaucratic National Organ Registry. She is aroused and amazed by Tenser’s body, just like the paying customers who gawk at his operations.

And in Barbarian, Justin Long’s A.J. is a Hollywood hotshot who is accused of rape by a woman who worked with him on a TV show. To afford his legal fees after the allegation becomes public, A.J. heads back to his home state, Michigan, where he owns some rental properties in Detroit. One is built on top of a seemingly endless series of underground tunnels. When A.J. discovers this — a revelation that rightly scares the shit out of Tess, the protagonist of the film’s earlier section — he busts out a tape measure to see how much value the new square footage will add to the property’s worth. He soon discovers that a giant, feral, naked woman stalks through the tunnels.

These films feel quite different. Nope is an exhilarating sci-fi blockbuster. Crimes of the Future is slow, meditative body horror. And Barbarian is cleverly plotted and non-linear, Pulp Fiction as a midnight movie. But, they share a similar approach to the monstrous. Simply being terrified is a luxury that these characters don’t have.

It’s a response that I, as a young person on a dying planet, relate to. Though previous generations might have been afraid of the increasingly sure knowledge that UFOs are out there, my reaction to those revelations has been, “Well, it can’t get any worse. Maybe the aliens have the tech to fix climate change for us.” That seems unlikely, but it’s the best I can manage, given the circumstances.

For generations who question whether they have any sort of future, for whom political reality is existentially terrifying, for whom the government can do nothing but grind them to dust, monsters, it seems, just aren’t what they used to be.