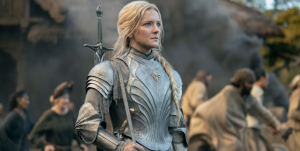 Although we had seen some smaller skirmishes in the first half of the season of The Lord of the Rings: The Rings of Power, the sixth episode finally gave us a thrilling action sequence that rivals the Battle of Helm’s Deep in The Lord of the Rings: The Two Towers. Given that The Rings of Power is the most expensive television show of all-time, Amazon Studios spared no expense when it came to the scope of the conflict. When Adar (Joseph Mawle) and his army invade Bronwyn’s (Nazanin Boniadi) village, they are rescued by the armies of Númenor. Elendil (Lloyd Owen), Galadriel (Morfydd Clark), and Halbrand (Charlie Vickers) combine their strength as they protect the people of the Southlands.

Prior to the battle itself, Arondir (Ismael Cruz Córdova) gives Bronwyn the same alfirin seeds that she had given to him as a gift in “A Shadow of the Past.” Arondir explains that it is an ancient Elven tradition to plant these alfirin seeds before a battle, as the Valar protect all life in existence. She says “new life, in defiance of death” before they part. This phrase turns out to be somewhat literal by the end of “Udûn;” after Bronwyn is critically wounded in the battle, Arondir uses the seeds to seal her wound, thus saving her life.

The Elves’ connection to the natural world and the relationship with the Valar are among the main themes that The Rings of Power has addressed. Although this may seem like nothing more than a charming romantic gesture on Arondir’s part, it’s a reference to a deeper bit of J.R.R. Tolkien’s mythology.

As Arondir explains to Bronwyn, planting the seeds is meant to ensure the fortune of the Valar. As The Rings of Power has shown in the previous episodes, the Valar are the angelic god-like figures that serve Eru. The Valar known as “Yavanna” has power over the life of all growing things in Arda (the fictional universe where Middle-earth resides). In Sindarin (the Elven language Arondir would be familiar with), she is also known by the name “Ivon,” or “Giver of Fruits.”

The specific details of the alfirin seeds’ origins are fleshed out in Tolkien’s Unfinished Tales. The Elvish word “alfirin” refers to the flower of Men called “simbelmynë.” In The Letters of J.R.R. In Tolkien (a collection of Tolkien’s drafts and endnotes that was published in 1981), he described these flowers as “not dry and papery, simply a beautiful bell-like flower, running through many colors, but soft and gentle.”

In Tolkien’s explanation, these alfirin seeds are largely associated with death, as they grow on the tombs of men (primarily in the white variety). Does this mean that The Rings of Power is purposefully changing the canon? Perhaps not. Although Arondir intends for new life to grow in this village, we see by the end of the episode that the entire surrounding area has been swept up to form the future site of Mount Doom. This also suggests that some of the human heroes that we’ve met so far might not last very long in the battle against the dark lord.

Adar’s Connection
It’s somewhat eerie when Bronwyn says “new life, in defiance of death,” because that’s the second time we heard the phrase in this episode. Before leading the Orcs to invade the village, Adar says the same phrase as he secretly plants seeds before giving a speech to his army. This is explained later on when it’s revealed that Adar was an Elf who was captured by Morgoth and tortured. He says that he is different from Sauron, as Morgoth’s chief lieutenant “sought to craft a power not of the flesh, but over flesh.”

Adar’s more empathetic backstory ties into his connection with the alfirin seeds. Unlike Morgoth, Adar values the life of the Orcs within his army, and treats them as his children. “Adar” is the Elven name for “father,” and he considers himself responsible for these creatures’ protection. Adar is simply looking to give his children a home, and tells Galadriel that the Orcs are “as worthy of the breath of life and just as worthy of a home.” While Galadriel claims that the Orcs are nothing but evil, Adar replies by saying that “We are creations of the One, master of the Secret Fire, the same as you.”

This “One” would be another reference to Eru, which draws an interesting parallel between Arondir and Adar. They may find themselves on different sides of the battlefield, but their goals are slightly similar, in a sense. While some early theories suggested that Adar had a more sinister backstory, it’s fascinating that The Rings of Power has given him a somewhat empathetic situation.

The Lord of the Rings Connection
The simbelmynë flowers that grow from these seeds are the ones that grow on the tombs of men in The Two Towers. We see them in Peter Jackson’s films when King Theoden (Bernard Hill) presides over the funeral of his son, Théodred (Paris Howe Strewe). There is a beautiful sequence where Theoden’s niece, Eowyn (Miranda Otto), sings as the fallen Rohan soldiers are laid to rest.