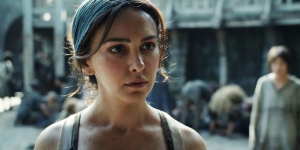 The Rings of Power has started to develop a concerning habit over the course of its first season. In the direst moments of its first massive battle sequence in “Udûn” and in the aftermath of the eruption of Mount Doom that plays out across the “The Eye”, the show feinted toward the death of multiple key characters only to reveal that they were fine moments later. This tactic is most often used to cheaply provoke an emotional response from the audience without committing to changing the status quo by killing a character, but in doing so it threatens to undermine the narrative and emotional stakes of the entire story. If The Rings of Power continues this trend of pretending to kill its characters in future seasons, it will seriously impact the audience’s emotional investment in the story.

“The Eye” was the worst offender between these two episodes, slowly revealing which characters survived the eruption (which turns out to be most of them) over the course of its runtime by primarily focusing on two groups: Galadriel (Morfydd Clark) and Theo (Tyroe Muhafidin), separated from the others and evading orcs in the ash-covered forest, and the surviving Númenóreans being led by Elendil (Lloyd Owen) and Míriel (Cynthia Addai-Robinson) back to their camp. This structure means that several major characters’ fates are left up in the air for much of the episode until Galadriel and Theo arrive at the camp to look for them. What follows is a string of scenes that hold out on revealing whether Bronwyn (Nazanin Boniadi), Arondir (Ismael Cruz Cordova), and Halbrand (Charlie Vickers) are alive for several minutes.

Theo first looks for Bronwyn at the medical tent, first mistaking another woman for his mother before his gaze settles on a body mostly covered by a blanket with long dark hair spilling out from under it. Theo almost uncovers the face below the blanket before Bronwyn and Arondir appear behind him, and a happy reunion is had. Shortly thereafter, Bronwyn takes Galadriel to speak with Míriel and Elendil, and during that conversation she mentions Halbrand, vaguely asking if “no one informed [Galadriel]” of what had happened to him. When we cut to yet another medical tent as Galadriel steps in, the camera keeps Halbrand out of view until the last possible second, feeding the idea that Galadriel is possibly looking upon her friend’s corpse instead of his lying injured in bed.

While either of these scenes could work in isolation, their proximity to one another makes the emotional manipulation all the more blatant. Each scene is predicated upon the idea that they might actually kill these characters, all of whom are original characters created for the show and are not canonically fated to appear down the line in The Hobbit and The Lord of the Rings, so that threat feels like it might actually have some weight. Until, of course, they walk it back with Bronwyn and Arondir and then try and pull the same trick a second time with Halbrand minutes later. This trick may work fine the first time, but once it’s been established that the writers will feint towards killing characters they actually have no intention of killing, all future instances of character death lose their emotional teeth. Why should the audience emotionally invest in any future character deaths, when there’s plenty of precedent to indicate that the writers will walk it back in short order?

These two scenes are also weakened by the fact that the show had already pulled this trick twice before. At the beginning of “The Eye,” Isildur (Maxim Baldry) is seemingly trapped within a burning building while trying to save the people inside. After this point, the show treats him as if he were dead. This is, of course, patently absurd — even casual viewers know that Isildur must survive to the end of the War of the Last Alliance and refuse to cast the One Ring into the fires of Mount Doom. But The Rings of Power sticks to its guns, as by the end of the season the character is still presumed to be dead, one of the few character deaths not to be walked back despite the fact that the audience knows it inevitably will be. Which undermines the emotional impact of his supposed death for anyone with an inkling of what’s to come.

The other instance of an earlier death fakeout came earlier, at the height of the battle between the Southlanders and Adar’s (Joseph Mawle) orcs in “Udûn” when Bronwyn takes an arrow to the shoulder as the Southlanders are racing for the safety of their fortified tavern. By the time she’s brought inside and put on a table to be attended to, blood is dribbling off of her and onto the ground below. In one of the show’s most visceral scenes, Arondir and Theo are forced to quickly remove the arrow and cauterize the wound. Once they’re done Bronwyn falls still, and for over thirty seconds we watch Theo tearfully calling for his mother to wake up before she eventually does.

Both instances of The Rings of Power feinting at killing Bronwyn feel remarkably similar to the infamous “women in refrigerators” trope in which a woman is killed off for the motivation or development of a man. The only difference is that in both instances Bronwyn is not actually dead, but does that make it any better? By not killing her off, The Rings of Power is able to effectively “fridge” her multiple times over in scenes that are focused more on Theo’s emotional response to possibly losing his mother rather than her own experiences. In “Udûn,” we don’t get to see her grappling with her failure to save her people because she’s too busy bleeding out, and by the time she’s doing better the Númenóreans have arrived to save the day. In “The Eye,” we spend no time with her as she pushes through the uncertainty of not knowing if her son is still alive after the erupting while she tries to help the people around her. Each apparent death is more about Theo than it is about her, and if she had actually died in either instance it would have been a textbook example of the “women in refrigerators” trope.

As The Rings of Power continues, it should stop relying on the cheap emotion of its death fake-outs. Instead, it should focus on the genuine pathos the show already has, such as the wonderful friendship between Elrond (Robert Aramayo) and Durin (Owain Arthur) or the now very complicated relationship between Galadriel and Halbrand. One of The Rings of Power’s greatest strengths is its characters, both new and old, and it would be better served to treat them with the respect they deserve. This is especially true in the case of Bronwyn, whose role as a single mother thrust into leading her people through a time of crisis could make for a compelling character in her own right, but only if The Rings of Power stops pretending it’s going to kill her whenever catastrophe strikes.