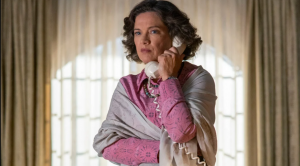 The cast of The Midnight Club is the heart and soul of the show. The large majority of my enthusiasm for a second season comes from the fact that I cannot wait to reunite with these characters. However, Mike Flanagan and co. do throw in a couple of cliffhangers that I’d be very eager to explore further, in particular, the big Dr. Stanton reveal.

Throughout much of The Midnight Club Season 1, Heather Langenkamp’s Dr. Georgina Stanton appears to be a doctor and facility head with a heart of gold, doing whatever it takes so that the residents of Brightcliffe hospice can look at every living day there as a win. Even though Samantha Sloyan’s Julia Jayne/Shasta expresses frustration with how Dr. Stanton runs her operation, Dr. Stanton herself never does a single thing to hint that she has anything else but the kids’ best interest at heart. However, then the final scene of Season 1 offers up some curious information that challenges the viewer to rethink everything they just saw.

The final sequence of The Midnight Club Season 1 follows Dr. Stanton through Brightcliffe as she closes things up for the night. When she gets back to her apartment, Dr. Stanton removes a wig and we see the Paragon hourglass tattooed on the back of her neck.

The first big question this sparks is, is Dr. Stanton actually Athena, the daughter of Aceso, or rather, Regina Ballard? While the story details do seem to align for the most part, I’m hung up on the fact that Athena was 16 in 1940 when the Paragon Tragedy took place. That’d make Athena 70 in 1994, a good deal older than Langenkamp who’s 58.

But whether Dr. Stanton is Athena or not, that still leaves us with another very important unanswered question; what are Dr. Stanton’s intentions? While it appears she’s been trying to protect Ilonka (Iman Benson) from the Paragon practices, at the very end of the show as the tattoo is revealed, a subtitle pops up that says “ominous music.” Could that tease that Dr. Stanton had nefarious intentions all along? I posed that exact question to Langenkamp herself during our Collider Ladies Night conversation.

Langenkamp began by revisiting when she first found out about this additional layer to Dr. Stanton:

As for what that surprise really means, Langenkamp did confirm what it suggests about Dr. Stanton’s current condition health-wise:

As for whether Dr. Stanton is good or evil, Langenkamp stopped short of giving us a clear-cut answer. In fact, she’s convinced Flanagan isn’t even certain about the route the character is heading.

Langenkamp laughed and added, “Today he might think that she’s all good, and then maybe tomorrow he’ll wake up and say, ‘Nope, I don’t think I like that idea.’”

There’s been no word yet on whether Netflix is moving forward with a second season of the show, but hopefully that announcement will arrive soon. While we wait, be sure to check out Langenkamp’s episode of Collider Ladies Night covering her journey from A Nightmare on Elm Street to The Midnight Club below: