With the sequel, So 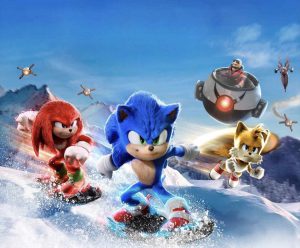 nic has made the most successful jump from games to films ever.

If you’d have told me that I’d be sitting in a screening of a second Sonic the Hedgehog film, on opening day, and hear the end of the film greeted with cheering easily as loud as those I heard at the closing of a midnight screening of Avengers Endgame, I’d never have believed you. If you’d told me it after that disastrous first trailer for the first Sonic movie, I’d have had you sectioned. And yet, here we are: it happened.

I’m really glad I never made it to any of the pre-release screenings of Sonic the Hedgehog 2, because although it would’ve been nice to see it early, it did award me the more organic experience I had today. I saw it in a real cinema, about two thirds full, the first showing near me, early-afternoon on release day, in a room full of the film’s intended audience – kids with parents, tweens, and the occasional older long-time fan.

There’s an energy in the room at screenings like this, and that energy can tell you a lot about a film. The thing it told me about Sonic 2 was simple: I wasn’t just enjoying it because of laser-calibrated pricking of my decades-honed sense of Sonic fandom – I was enjoying it because it was a good film in its own right. It’s by no means perfect, but very high highs and fairly modest lows make this an easy recommendation, and definitely among the best video game-based movies to date.

To some extent, Sonic the Hedgehog 2 has that strong second album gene found in some of the Marvel films (though, to be clear, it’s more Guardians of the Galaxy Volume 2 than Thor: The Dark World). After a slightly stumbly, uncertain-footed origin story, the writers know what they’re doing with these characters now – and that lends to a wonderfully self-assured screenplay that really leans into the strengths of the film and the source material alike.

Leading the charge is Jim Carrey with a zany, over-the-top performance as a now completely unhinged Dr. Robotnik that feels like something of a late career renaissance for him, returning to the exuberant eccentricity that made him so beloved in the 90s. Ben Schwartz returns as a perfect Sonic, and this time is joined by Idris Elba (Knuckles) and Sonic game veteran Colleen O’Shaughnessey (Tails).

The rest of the human supporting cast from the first movie also returns, though all with slightly reduced roles. A common sentiment with these films is to be annoyed that time is spent with humans rather than with Sonic – but perhaps the greatest trick Sonic 2 plays is fully bedding James Marsden and Tika Sumpter’s Tom and Maddie Wachowski, and their extended families, into the storyline of Sonic and his friends. Their adoption of Sonic as a weird little alien son is central to the film’s themes, and it’s actually difficult to imagine this version of the Sonic lore without these characters continuing to play at least a minor role. That’s a big upgrade in my opinion considering I left the last film thinking they were fine but hoping that the sequel would write them out entirely.

The way these characters are used is largely to the credit of a screenplay that’s surprisingly deftly plotted for a ‘video game film’. To be cold about it, on paper there’s a few things this story must do: Sonic and Tails must meet and become believable best friends in record time. Sonic and Knuckles must establish a rivalry. Robotnik needs to come back from where he was banished at the end of the first film, and evolve into something closer to his gaming counterpart. Lore about Chaos Emeralds and ancient societies must be established, and Sonic must further his relationship with his human carers. This is a lot for any film to accomplish well in an admittedly slightly too long two-hour run-time (including credits).

But, somehow, inexplicably, director Jeff Fowler and screenwriters Pat Casey, Josh Miller and John Whittington have managed it. When the movie must sideline the humans to give Sonic and Tails time for a mini adventure to cement their friendship, it doesn’t feel painfully artificial. The cementing of Sonic and Tails’ friendship involves a silly action scene, but ends with a surprising emotional rawness that sees their relationship completely solidified. When the humans make a return to the story, it feels like a natural segue. If you step back, you can absolutely see the cold, workmanlike reasoning behind this structure, but at its best you simply do not care about it. It absorbs you all the same, aside from when jarring product placement and pop culture references fail to land well.

A good adaptation should use the shift of medium to enhance the source material. What makes Detective Pikachu work, for instance, is that it tries to keep canon with the games and present the world of Pokemon from another angle. Tomb Raider and Uncharted are fine but feel more rote because they tread a lot of the same ground as the games without actually adding much. Street Fighter and Mortal Kombat felt like they existed in the shadow of the games, largely for the worse. It’s arguably down to the simplicity of the source material, but Sonic is able to elevate the most simple of the series concepts thanks to its medium.

Take the trifecta of Sonic, Tails, and Knuckles. Their strengths as depicted in the games are replicated here – speed, smarts, and strength. But in film it just works better. Knuckles’ strength can be displayed without, y’know, inaccurate combat and rubbish emerald hunting. Tails and his gadgets repeatedly play a key role throughout that doesn’t boil down to throwing him into some boring mech as the anti-Robotnik.

Much of this setup is probably owed to some degree to the way Marvel demonstrated a scalpel-precise way to weave different heroes together in their superhero crossovers. I don’t think it’s any coincidence that the third act of Sonic 2 features a circular shot of the three preparing for an enemy onslaught and then going into battle that absolutely echoes similar shots in Avengers and Age of Ultron. Curiously, it also feels better in that moment than any DC film that has also tried to ape those moments.

The core story is fairly inconsequential – a globe-trotting romp that is serviceable but largely exists to facilitate Carrey’s scenery-chewing and the interactions of the three anthropomorphic heroes. It’s a mash-up of the second and third Sonic games that fans will delight in, with a sprinkling of elements and references from other games including Sonic Adventure 2 military organization G.U.N and Robotnik’s lackey owning a coffee shop called ‘The Mean Bean’.

Crucially, this stuff is executed in a way that’s fun for fans, but as more of a wink than an elbow in the ribs. It doesn’t get in the way of the most important thing: this is a family film for kids, including those who have never even looked at ancient games that came out decades before they were born. The source material is treated with reverence, but not as an unassailable god.

The result is a riotous adventure that’s a subtle but measurable little upgrade on its predecessor. The largest point I can raise against it is, as mentioned, the length. There’s a lot of ground to cover, but two hours for a kid-friendly caper still feels too long, and one can easily see where sequences such as a montage of Sonic home alone, a wedding-gone-wrong for the human characters, and a dance off could’ve all been trimmed to knock 15 minutes or so off the run-time.

But we come back to that ending. As the credits rolled decorated by some truly gorgeous game-tribute sprite art, people started to applaud. It started in a corner where a bunch of lads in their late tweens were sitting, then spread. I’ve got to be clear here: this is in Britain, too. Cinema applause isn’t very common at all here. I’ve pretty much only ever experienced it in Star Wars and Marvel films. And now, Sonic. In a room full of the film’s target audience, the reaction seemed to be utter glee. As a post-credits stinger teased what’s next, a girl who couldn’t have been much older than 10 a few rows in front shot out of her seat in excitement, shout-whispering a character’s name to her parents.

That’s probably the most impressive thing here. From a disaster first trailer, through a redesign, the Sonic movie was a tale of redemption. The sequel is, in a way, perfectly imperfect – a lot like the Sonic games. But it sticks the landing, and is great fun. I expect it to make its money – and a third film, plus a Knuckles spin-off TV show starring Elba, are already on the way.

Does Sonic 2 or its predecessor deserve the title of the best video game movie ever? I don’t know. That’s definitely up for debate. What isn’t is this: as a complete franchise, Sonic has made the most successful jump from games to films ever. And the future seems bright; a second golden age for the blue blur might be in its early stages.