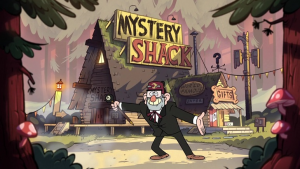 “Gravity Falls,” the cult classic animated children’s series about two kids solving mysteries in a small spooky town, aired from 2012 to 2014, while I was in college. My classmate and I both watched the first season as it aired, so of course, we would argue about it frequently. I loved “Gravity Falls” for its elements of serialization, hiding secret codes and symbols in seemingly innocuous episodes. I hoped to see those elements grow into something huge, just like in the anime I liked to watch. My friend disagreed. He was an even bigger fan of the series than I was, but he liked it most of all as a venue for character-specific jokes. There didn’t need to be an ongoing plot for the series to be worth watching, he said.

“Gravity Falls” became even more serialized in its second season. The motivations of characters like grumpy Grunkle Stan and his mysterious brother Ford were revealed. Our heroes Dipper and Mabel make choices they can’t take back. The ambitious overarching plot of “Gravity Falls” became the key to the show’s legacy, solidified by the release of its bestselling companion and lore guide “Journal #3.” I had won, I thought. Or had I?

It’s really, really hard
As a child, Hirsch wished his favorite television shows would tell stories longer than just one episode. He wanted characters to grow and change each week rather than resetting to normal. As he grew up, he realized that serialization was common in children’s anime but rare in American cartoons. “Why aren’t there any shows like this on kids TV?” he asked Vox in a 2014 interview. Hirsch and his crew decided to change that. The majority of the first season of “Gravity Falls” were classic “monster of the week” episodes, straight out of the “Buffy the Vampire Slayer” playbook. But Hirsch was careful to hide small connections between these episodes, all while keeping an eye on fan response. If his team could prove to the higher-ups at Disney that children could handle complex storytelling, he thought, all bets were off.

Hirsch would find out to his chagrin that there were reasons serialized storytelling was a rarity in American cartoons. “We have smaller budgets and faster turnarounds, and it’s really, really hard,” he says in the Vox interview. Ensuring that episodes that were written out of order successfully knitted together without contradictions led to longer development times, broken pipelines and delayed airing dates. Meanwhile, Hirsch fought an endless battle on behalf of his writers and animators against Disney’s Standards and Practices Department, who would push back on countless small details throughout the show’s airing. Considering how difficult the show was to make, it’s no surprise “Gravity Falls” ran for just two seasons. Its most special qualities made it unfeasible as a long-term project.

Everything changes when you sit down to write
You might expect, considering how challenging it was to make “Gravity Falls,” that every beat of the series was meticulously planned out. But this was not the case.  “No matter how many grand plans you have in your head,” Hirsch said to The Mary Sue in an interview, “everything changes when you sit down to write.” The first season was mapped out from the beginning, but was purposefully baggy in structure to accommodate a variety of ideas. Going into the second season, Hirsch and his team had only a series of beats they wanted to hit. They knew that Ford would appear and herald the show’s endgame. They knew that Dipper and Mabel would come of age and leave Gravity Falls. Otherwise, as Hirsch would tell The Mary Sue, “fun stuff happens in the meantime.”

The animators and writers of “Gravity Falls” began the series with a rough idea of who the characters were and what they sounded like. But these ideas could change at any time. “We didn’t really know who Ford was, from a personality perspective, until we sat down to write him,” Hirsch said to The Mary Sue. “You learn as you go.” The team knew that Stan would have a brother who would be important to the narrative. But by the time Ford appeared in season 2, he had transformed from a plot device into a flesh and blood person. Most importantly, he had the voice of J.K. Simmons. Simmons was reportedly cast late in the process, but according to Hirsch “his take on the role “changed how we thought about the character.” Hirsch also shouts out the voice acting of Linda Cardellini, whose “grounded performance” defined the fantastic (but underused) character of Wendy.

Making stories happen
Making “Gravity Falls” was about of discovery, mixing and matching characters to see what fun combinations might result. Sometimes this meant adjusting characters slightly to ensure the best results. In the Vox interview, Hirsch discusses the challenges he faced writing Dipper’s character. When he drew too much upon his own personality at that age, Dipper became an antisocial, unlikable brat. “I realized that I needed to write Dipper as actually more sweet, naive and positive than I was at his age,” Hirsch said, “in order to make stories happen.” Similarly, the team had to learn over time exactly how to use Stan. “Stan is a potent spice,” Hirsch said. “If you…have him be too big and too loud…he can become grating and a pain in the neck.” Once the team behind “Gravity Falls” realized that Stan was “out of touch,” rather than truly mean, they could put his character to most effective use.

It’s tempting to assume that it’s a bad thing when series aren’t carefully planned from beginning to end. Fans revolted against the final season of “Lost,” which failed to answer many of the show’s mysteries and provided surprisingly dull answers to others. But planning is no recipe for success if the characters are not respected. The finale of “How I Met Your Mother,” filmed long before the last season, twisted its cast to fill roles that they no longer fit after years of evolution. The results were deeply unsatisfying. By contrast, the creators of “Breaking Bad” chose not to kill Jesse after a break in production during the writer’s strike of 2007 gave them room to reconsider. Jesse (and his actor Aaron Paul) rewarded them by becoming the show’s moral center, and a crucial part of its formula.

The fun part of writing
The staff of “Gravity Falls” did not have an in-depth, point-by-point plan for the series. They could not say, for instance, what Dipper, Mabel and Stan could do in any given scene. But they became very good at predicting what might happen, based on the rules they drew up around the characters and their interactions. In Hirsch’s words, “Mabel’s not dumb; she’s a ham. Dipper is smart, but he’s still sweet. Stan is not mean; he’s out of touch.” Ensuring that the characters were true to themselves in each scene was hard work. But once that work was done, the rest was the simple pleasure of discovery. As Hirsch would tell “The Mary Sue,” figuring out how it all fits together in the writer’s room…that is the fun part of writing.”

Back in college, I had perceived one layer of “Gravity Falls,” which was that everything in the show was connected. This was a big part of the show’s appeal, and something the show’s creators fought for despite how challenging it was to implement in the end. At the same time, I now see that my classmate was also correct. Deep in its bones, “Gravity Falls” puts character first. Dipper and Mabel grow and change throughout the series not just through the long-term plans of the staff, but through aspects like voice acting, design and constant behind-the-scenes tinkering. It’s a perfect combination of form and function for a story about adolescence and a town that is always revealing fun and unexpected secrets.