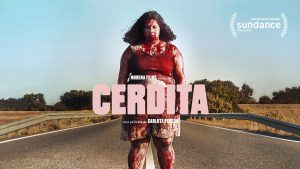 Teenager Sara, who’s family own the local butcher shop, finds herself the butt of jokes due to her weight, with many of the girls in town calling her Piggy and sharing pictures of her on social media. After a group of girls bully her and almost drown her at the local pool before stealing her belongings, Sara is forced to wander all the way home in nothing but a bikini. However, as she’s walking home, she comes across a mysterious man, who witnessed her abuse at the pool, abducting one of the girls. Spotting one of the bullies screaming for help from inside the back of the van, will Sara choose to help and alert the authorities or will she stay quiet, knowing that someone has finally stood up for her and taken care of her tormentors?

Adapted from her earlier short film, PIGGY (known as Cerdita in Spain) is a horror drama from writer and director Carlota Pereda. It focuses on a teenager who’s struggling to fit in due to the wickedness of others but finally has a choice of eradicating her bullies for good if her conscious lets her.

Laura Galán is terrific as Sara who we first meet sat at the counter in her parents’ butcher shop, doing her homework. As she gazes out onto the street where her peers are having fun, we quickly get the impression she’s an outsider. This is confirmed by the girls’ remarks towards her and the posts they publish on social media. It’s tough being a teenager, especially when you’re on the receiving end of torments, but especially so in this day and age where you cannot escape the abuse with it often following online long after the face-to-face interaction has ended.

Seeing the bullying unfold is difficult to watch as Sara is called all the names under the sun and made to feel bad, simply by merely existing. Not only that, but the ringleader decides to try and drown the poor girl at the pool, with her accomplices doing nothing to stop her and instead help her poke fun at the girl. When a stranger, who clearly has ill intent, gets his hands on Sara’s bullies, it’s hard to feel sorry for them. It’s what they deserve after making her life a misery. Even her parents provide little support and instead serve up salads to cure her ‘fatness’ rather than address the fact that these girls are terrible to her and shouldn’t be able to get away with bullying her, regardless of Sara’s size.

The story is well-paced to throw the focus back onto Sara once the abductor enters the picture. The will-she, won’t she, prospect of letting slip to the police about what she’s witnessed keeps you guessing at how things will play out and makes you question your own motives if you were in her shoes. Something about the man, perhaps his kindness at a time when she needed it most, she seems to find alluring, but with the townsfolk increasingly wary and the police asking questions, sooner or later Sara will need to make a choice. Discovering her mysterious hero has murderous tendencies, the reality of what has happened soon sets in but will she decide to speak up and risk him coming after her?

Much of the killer’s antics are done off-screen, and so we see very little blood until after the fact, but from the way the film’s been shot, you can tell he’s a ruthless SOB. Merciless, except in the face of Sara who he seems to either have empathy or sexual feelings for, he doesn’t think twice about doing in anyone who gets in his way as shown by reversing at full speed into a group of guys tormenting Sara. This weird bond between the two is fascinating to watch, but is never really explained. Perhaps it’s for the best.

The anticipation keeps viewers on their toes throughout PIGGY with its raw hurt and the dilemma it causes, even if the killer’s generosity towards Sara can be a bit fantastical. A gripping performance from its lead star makes for a captivating horror thriller that will leave you teetering on the edge of morality.