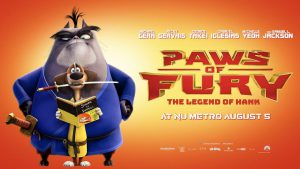 Paws of Fury: The Legend of Hank actually has sort of a fascinating backstory that spans over a decade of development and many, many different production companies. Originally called Blazing Samurai, the film was envisioned as the animated story of a Black samurai protecting an Asian village. That eventually shifted into a story of a dog samurai in a world full of cats, with a story loosely based on Mel Brooks’ classic parody Blazing Saddles. This is all to say that reading about the wild production of Paws of Fury: The Legend of Hank is far more interesting than the finished product has to offer, a humorless, exhausting 85 minutes of nonstop puns, stereotypes, fart jokes and ancient pop culture references.

Set in a feudal Japan-inspired land occupied solely by cats, Ika Chu (voiced by Ricky Gervais) decides to expand his massive palace. In order to do so, he must get rid of the nearby village of Kakamucho. Ika Chu tries to get the villagers to leave by sending thugs to Kakamucho, but when the villagers demand that a new samurai be assigned to the town in order to protect them, Ika Chu sends them the dog prisoner, Hank (Michael Cera). To help prepare for the onslaught of Ika Chu’s thugs, Hank trains with the catnip-drunk samurai Jimbo (Samuel L. Jackson) to become the samurai that the town needs.

Let’s go ahead and get the positive out of the way, since there’s so little of it. Paws of Fury: The Legend of Hank does at least occasionally touch on the idea of judging someone simply because of what they look like. There are some poignant lines here and there, as when one cat mentions that he doesn’t know why he hates dogs, just that he knows his father did, and it just feels natural to hate dogs. Of course, the screenplay by Ed Stone and Nate Hopper can’t delve into this idea in the same way that Blazing Saddles did, but the fact that it at least tries to somewhat is admirable.

But beyond this attempt to state a message about not judging a book by its cover that we’ve seen in countless animated films, Paws of Fury: The Legend of Hank is an absolute mess. The attempts at humor are excruciating, as the film’s primary attempt at jokes come in the form of eye-roll-worthy puns about cats and dogs. Amongst those wall-to-wall puns are exhausted entertainment references (one character tries to distract another by stating “I am your father”), the expected poop and fart jokes, and tired and offensive Asian clichés. Is there a giant cat named Sumo? Of course there is. And yes, of course, the villain Ika Chu sounds like the popular Pokémon character.

Even a voice cast that includes Cera, Jackson, Michelle Yeoh, Djimon Hounsou, with Mel Brooks also essentially reprising his Blazing Saddles role, can’t save this animated monstrosity. Everyone sounds understandably bored throughout, and these voice performances can’t bring to life a script that is this hollow. You can almost hear the subtext of “I did this for the paycheck” under the delivery of every line.

Even more shocking is the impressive directing team behind this abomination. Paws of Fury: The Legend of Hank is co-directed by Rob Minkoff (co-director of The Lion King), Chris Bailey (director for Kim Possible and the underrated Clerks: The Animated Series), and Mark Koetsier (story artist for Big Hero 6, Kung Fu Panda, and How to Train Your Dragon). With all this animation talent behind Paws of Fury, it’s shocking how ugly The Legend of Hank looks, almost like a cutscene from a PlayStation 3 game. Even though there are attempts through flashback scenes to try and add some visual flair to this story, the inherent blandness of the animation still peeks through.

Who knows what Paws of Fury: The Legend of Hank could’ve been when it was originally envisioned over a decade ago, but what it ultimately became is a tiresome, tedious, and uninspired animated adaptation of a classic parody that doesn’t have any of the original’s comedic wit or bite. To put it in terms that Paws of Fury would understand, The Legend of Hank is a ruff experience that is absolutely pawful.