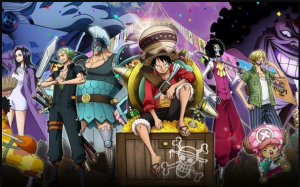 One Piece: Stampede is an action-packed celebration of the franchise’s 20 years, and one that could be the series’ best movie!

After more than 900 episodes and over a dozen feature films, it can be difficult to generate content that doesn’t simply repeat the past. The One Piece series has seen and done a lot at this point, yet despite its hefty history, the series’ newest film, One Piece: Stampede, is a satisfying effort that takes the franchise to exciting places.

Stampede is the 14th film in the franchise and is directed by series newcomer Takashi Otsuka. Beyond just commemorating the anime’s 20th anniversary, he’s with also crafting a film that actively takes place outside of the One Piece canon. The choice to isolate the story makes it both more accessible and a pretense to tell a pirate version of It’s A Mad, Mad, Mad World. Which is not at all a bad thing. It’s actually a pretty brilliant premise that keeps the story simple yet still allows for a lot of chaos. The famous pirate Gold Roger has hidden legendary pirate treasure on Delta Island, with only one hint giving any sort of indication of its location: “In a deep lofty darkness you will find your answer.”

The powder keg of a situation at the Pirate Festival doesn’t just involve the treasure that’s hidden away, but there’s also the collective bounty of all of the pirates that have assembled on Delta Island. The combined total would be in the hundreds of billions, and be an easy payday for any opportunistic bounty hunter. In other words, there’s a lot of fortune up for grabs. Additionally, the Pirate Festival is a known time where lawlessness reigns and anything goes on the isolated island. It’s almost like Purge rules are in effect.

The sheer premise alone is an easy excuse for most of the more memorable pirates from the franchises’ lengthy run to make appearances. One Piece: Stampede is a movie that delights in rewarding long-time fans with all sorts of familiar faces (Captain Buggy! Capone Bege! Lily the Glutton!). The film even makes fun of itself over how many characters are involved in this festival. These surprise appearances are all a lot of fun, but it’s the new friends and foes that are introduced in Stampede that make a strong impression.

There are a lot of characters here, which can feel a little overwhelming for the uninitiated, but it’s never to the film’s detriment. The fun context of some of these characters will be lost, but you’ll never be confused over plot, even if this is clearly designed more for the fans.

Douglas Bullet (Damian Mills), a former member of Gold Roger’s old pirate crew is the standout new character here. Bullet and his cocky attitude are a lot of fun, but Donald Moderate (Anthony Bowling), a master of illusions named Ann (Macy Anne Johnson), and even Buena Festa (Mick Wingert), the master of ceremonies for the prestigious Pirate Festival are memorable.

Stampede begins at a very strong baseline that just wants to honor the series and its characters, but with every new scene the film attempts to outdo itself and go even further. It gives the film a breakneck pace that sometimes favors action over story and smaller character moments, but this is nothing short of invigorating. All of the Straw Hat Crew tag team battles, the return of Hancock and her petrification powers, and Luffy against Shiki are eye-popping sequences with no weak links. The film’s final fight against Bullet is particularly incredible and sure to be remembered as a highlight in the series’ 20-year history.

One Piece: Stampede is similarly euphoric over just how aggressively overpowered its villain, Bullet, is. Yet he’s not beyond the Straw Hat Crew’s capabilities. Like many of the best One Piece villains, he’s a foe that initially seems unstoppable, only for him to eventually be cowering at Luffy’s feet. That being said, the fight against Bullet, as amazing as it is, is practically an hour long and takes up the bulk of the film. This will inevitably rub some the wrong way, but Stampede continually brings in more support for the Straw Hat Crew to keep the battle interesting. Still, it does feel a lot like One Piece’s take on a giant MCU showdown.

In addition to the film’s hectic pace, this is also a movie that just looks freaking beautiful. The staff at TOEI Animation really go above and beyond with their work here. This easily puts Dragon Ball Super: Broly to shame when it comes to gorgeous, flowing visuals. Delta Island’s lush locales are lovingly brought to life and the big battle against Bullet sets off dazzling light shows. Every character gets a fitting, elaborate introduction and the extensive chase and water-based sequences are a joy. One Piece isn’t always known for its stunning animation, but the work done in Stampede is a pleasant exception. To accompany these visuals, Stampede features a winning score by regular One Piece composer, Kohei Tanaka, with the film’s theme “GONG,” performed by Wanima.

One Piece: Stampede is the synthesis of everything that is so great about the long-running series. The film is a gorgeous example of what the anime is capable of doing and while it does prioritize action over story, it’s not devoid of the humor and lighter character interactions that also fill the series. This is a full movie with a runtime of an hour and forty-five minutes. There’s a lot to love in this movie, whether you’re a longstanding One Piece aficionado or someone that’s never seen an episode.

One Piece: Stampede will be in theaters for a limited engagement on Oct. 26 and 30 in an English dub, and on Oct. 24, 29, and 31 in Japanese with English subtitles

Daniel Kurland is a published writer, comedian, and critic whose work can be read on Den of Geek, Vulture, and Bloody Disgusting. Daniel knows that the owls are not what they seem, that Psycho II is better than the original, and that Hannibal is the greatest love story ever told. His perma-neurotic thought process can be followed at @DanielKurlansky.