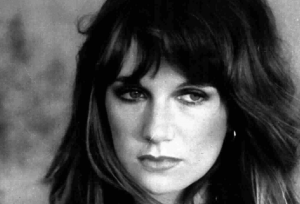 When you think of Scream Queens, the usual names come to mind like Jamie Lee Curtis, Neve Campbell, and Heather Langenkamp. That trio and many others have dominated the American horror scene. There are a plethora of non-American films and actresses, however, that have given us some great Scream Queens, such as the Argentine Olivia Hussey in Bob Clark’s 1974 Canadian film Black Christmas. Another you may not have heard of is one who is just as influential to horror as someone like Curtis, the Giallo Scream Queen Daria Nicolodi.

Nicolodi was born in Florence, Italy in 1950. In her early 20s she found some success in acting, appearing in a few films as well as performing in the theater. It was at the age of 24 that her life would change forever when she auditioned for a film directed by a man named Dario Argento. At ten years Nicolodi’s elder, Argento had already achieved huge success in the Italian film world. In 1968, he co-wrote the story for Sergio Leone’s epic western, Once Upon a Time in the West, before becoming a director himself.

His first film, The Bird With the Crystal Plumage, was a Giallo, a type of Italian film that combines aspects of psychological mysteries with gory slasher pictures. It was a hit in the genre, and he became the top name in Giallo. If the 80s in America was all about slashers, in Italy in the 70s, Giallo was the horror trend. After two more successful Giallos, Argento began casting for his fourth, a film that would define his legacy called Deep Red.

Daria Nicolodi and Dario Argento’s Collaboration Begins with ‘Deep Red’
One of the actresses who came in to audition for the lead role of Gianna Brezzi, a reporter out to capture a mysterious killer, was Daria Nicoldi. Argento was smitten with Nicolodi, maybe then just professionally, but she not only won the part but Argento’s heart. The two fell in love on the set of Deep Red and would begin an up and down relationship that lasted a decade and produced a daughter in Asia Argento, who would go on to become an actress herself, most notably known to American audiences for her 2000s roles in XXX and Land of the Dead.

Maybe the blossoming romance is why Nicolodi shines so bright in Deep Red. She conveys every emotion needed, from strength to fear. Who could forget the chilling scene with Nicolodi’s Gianna walking through a dark house all alone, a doll baby with a noose around its neck hanging from the ceiling? What may have worked best is the romance between Gianna and David Hemmings’ Marcus Daily, the other lead of the film who works with Gianna to catch the killer. The chemistry between the two is palpable. You quickly fall for the characters, and now because you care about them and don’t want to see them die, the killer becomes that much more scary. Any actress in a horror film can scream and run, but it takes a special one to make you care.

Daria Nicolodi Explores a New Talent – Writing
Two years after Deep Red in 1975, Nicolodi showed that she had another skill besides acting. She could write. With Argento she co-wrote his next film, Suspiria. Much of the story idea and themes came from Nicolodi, as well as the ending, which was based on a dream she had. It was Argento’s job to flesh it out. Their collaboration would become Argento’s masterpiece. Set in Germany, Suspiria tells the tale of an American student (Jessica Harper) who travels to Europe to train at a dance academy that just so happens to be run by a coven of witches.

With Nicolodi’s imagination and Argento’s ability to make the scariest film beautiful with his hypnotic use of vibrant colors, the duo created a film that broke through to American audiences, even leading to a well-received remake starring Dakota Johnson in 2018. Nicolodi was to be in the film as well, but an injury prevented her from appearing in nothing more than a cameo. No matter. She had already proved that besides being a scream queen, she could be a scream creator as well.

Nicolodi’s next role came in 1977’s Shock. While the film didn’t make much of an impact, it gave the actress a chance to work with another Giallo legend in Mario Bava, one of the fathers of the genre and the man behind 1971’s A Bay of Blood.

Nicolodi and Argento Reunite for ‘Inferno’
In 1980, Daria Nicolodi would reunite with Dario Argento for Inferno. While she wouldn’t get a writing credit, she was once again instrumental in the film’s creation. It was her story in fact, and from the meticulous notes she wrote, Argento formed the screenplay. It again dealt with witches, where a woman in New York City has gone missing in an apartment that was once inhabited by an ancient witch.

While Nicolodi would act in the film, she was not the lead this time around. Here she played a Countess named Elise De Longvalle Adler. Whereas in Deep Red, she pulled viewers in with her ability to build a complex character, this time Nicolodi is a victim. She gets you by screaming her lungs out, when in her final moments she is attacked by a pack of cats and then stabbed to death by the film’s shadowy villain. It’s a violent end made all the more frightening by the desperation Nicolodi conveys in her final moments.

Nicolodi and Argento Continue Collaborating
Argento and Nicolodi collaborated again in 1982 for Tenebrae, another black gloved killer Giallo slasher, where someone, influenced by an American author’s book, goes on a murderous crime spree. Nicolodi did not write the screenplay and only agreed to a very small role, but when the original actress for Anne, the author’s assistant, exited the film, Nicolodi took over. It’s not much of a role and definitely not one of her most memorable. She is given very little to do, but still, it showed how integral she had become to Giallo and to Argento’s films, that even Nicolodi in a small role meant the world for how one of Argento’s films was perceived.

In 1985, Argento and Nicolodi came back together for Phenomena, starring a fourteen-year-old Jennifer Connelly and Donald Pleasence. Though her relationship with Argento was coming to an end, you would have never guessed it by the performance Nicolodi gave. It’s one of her best and maybe the most fun, for this time, she got to play the killer.

Here, Connelly plays a student who can psychically communicate with insects. She uses this power to track down a killer who is murdering other students at the school. Nicolodi plays Frau Brückner, the head of the school. Many of her scenes are with the young Connelly, with the veteran actress surely mentoring the young star, who was in only her second film and who would go on to become an Oscar winner. The two are great together, but without Nicolodi stealing the scenery. She allows an inexperienced Connelly room and pulls her toward a memorable performance. That doesn’t mean that Nicolodi takes a backseat. The film’s climax shows the actress as a woman come undone. Her eyes are wild as she screams like a maniac. The Italian Scream Queen had just become a great film villain.

Two years after Nicolodi had ended her relationship with Dario Argento, she came back for 1987’s Opera, a Giallo about a killer who abducts an actress named Betty (Cristina Marsillach) and forces her to watch him slay his victims. Nicolodi plays Betty’s agent, Mira, and in a shocking moment, is shot dead by the killer in brutal fashion. It gave Nicolodi a chance to expand. She had played the final girl, she had played the victim, and she had even played the killer. Now she had the chance, based on her reputation, to play the shock value. It was a way to subvert expectations and go against what she had always done. It works. While you’re not sure if Mira is going to make it to the end, it’s a jaw dropping surprise to watch her die so early and in such an awful fashion.

Twenty year later, in 2007, Argento and Nicolodi would reunite one last time for Mother of Tears. In previous years, Nicolodi had acted in a few films with her daughter, Asia Argento. Now, mother, father, and daughter were all together. Asia gets the lead, playing a student named Sarah Mandy, who must fight to defeat a witch (it’s the last of Argento’s “Three Mothers” trilogy following Suspiria and Inferno). Nicolodi plays her mother, Elisa Mandy. While the finale isn’t as great as the first two in the trio of films, with this one set back by script issues and delayed multiple times, it’s a bit too campy, but it’s also a lot of fun. It’s fitting that it would be Nicolodi’s final film role (she would pass away in 2020), for what better way to exit a career than by working with your family, passing the torch from one Italian cinema stalwart to another.