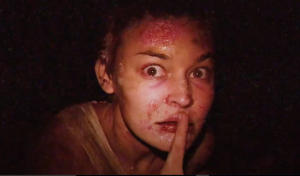 HBO had a huge 2022 with shows like House of the Dragon and Euphoria, but 2023 promises to be an even bigger year for the network with their adaptation of The Last of Us. The series has slowly been ramping up its marketing horror train as we’ve gotten closer to the new year. Now new footage teases a bit more of Joel and Ellie’s country-wide road trip from hell.

The roughly 20 seconds of footage was part of a larger 2023 lineup trailer. While there’s not much new footage in that time span, there are a few new shots that fans of this horror franchise should instantly recognize. The first of two new shots is from the first game’s memorably horrific outbreak day opening sequence. We see Joel played by Pedro Pascal with the camera behind him running with his daughter Sarah in his arms as chaos ensues around them. Understandably, she looks absolutely terrified. If you played the game then you know exactly where that frantic scene is going. For the few who haven’t, get your tissues ready.

The next new shot is from the middle of the first game where Joel and Ellie are being chased by an armored truck. Like with the opening sequence, We’ve seen this scene in other previously released footage. However, the new shot sees Ellie played by Game of Thrones’ Bella Ramsey, shooting at the truck as she runs away for dear life. Like the jaw-dropping opening sequence, this chase is one of the most intense moments from the game. Because of that, it’s going to be exciting to see that be translated into live-action.

The same sentiment can be said for the entire series. From the trailers, this looks to be one of the purest video game adaptations we’ve ever seen. The Last of Us, when it came out in 2013, was praised for its cinematic character-driven storytelling and rich horror gameplay centered on very relatable human fears. It was a revolutionary milestone for the medium. Also, with every new piece of footage, Pascal and Ramsey seem like the perfect Joel and Ellie. Their brilliant relationship was key in making the game one of the best horror stories ever told. This series appears to know that. It helps that the game’s director Neil Druckmann is involved in this adaptation as a co-creator with Chernobyl’s Craig Mazin.

The Last of Us will be premiering sometime in 2023. Along with Pascal and Ramsey, the series will star Gabriel Luna, Merle Dandridge, Anna Torv, Murray Bartlett, Nick Offerman, Storm Reid, and Melanie Lynskey. It will also feature appearances from Troy Baker and Ashley Johnson who played Joel and Ellie so masterfully in both of the games.

While horror and video game fans alike anxiously wait for HBO’s The Last of Us next year, you can watch the new footage down below in the full HBO Max teaser.