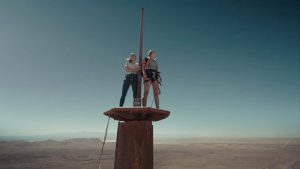 Best friends Becky and Hunter find themselves at the top of a 2,000-foot radio tower.

Director Scott Mann (also co-writing alongside Jonathan Frank) practically backs himself into a corner with Fall, leaving it difficult to care whether the protagonists in peril atop a 2,000-foot radio tower live or die by the time they start scaling it.

A simple setup goes on for roughly 30 minutes, establishing characters as various degrees of annoying, unlikable, or flat-out dumb (if such a subgenre exists of idiotic thrillseeking white women willingly placing themselves into danger that we are somehow supposed to care about, you can drop Fall right in there).

Becky’s (Grace Caroline Currey) life is a mess one year after a tragic mountain climbing accident that saw the death of her husband Dan (Mason Gooding). She appears to be an alcoholic with no direction, and her father (Jeffrey Dean Morgan) worries about her. However, he says horrible things about Becky’s late husband to prove his point that she needs to stop wasting time morning him. He means well and is looking out for his daughter, but the dialogue doesn’t exactly paint him as a positive force in Becky’s life.

To be fair, dad realizes he has an unproductive approach toward reaching his distant daughter. As such, he convinces Becky’s best friend Hunter (Virginia Gardner), who was also there the day Dan fell to his death in a freak accident, to check up on her and to do something together to put her in a more healthy state of mind hopefully. It’s also apparent that Becky and Hunter haven’t spoken much since the tragedy. Hunter suggests climbing a massive radio tower (almost twice as tall as the Eiffel tower) and spreading Dan’s ashes. Cue the themes about confronting trauma and living life to the fullest (which involves a death wish for some people).

At first, Fall feels like it’s trying to be a parody of the frustrating stupidity I keep bringing up. Not only do Becky and Hunter (especially the latter) come across as dolts (who in the hell would climb a random tower that no one knows is even safe to do so, and more importantly, has parts constantly creaking the further they go up), but there’s also a social media angle as Hunter has a sizable following from her climbing and encouraging people to find a crazy activity that makes them feel alive. The message behind it is also smartly laid out without beating it over anyone’s head.

While Fall boasts a clever concept, most of its moves and plot reveals are telegraphed stolen clichés from nearly every other type of survivalist movie (including the one that should be banned from all future scripts unless it’s legitimately well executed). Fortunately, Becky and Hunter display resourcefulness and resiliency once stranded, turning them into characters worth rooting for.

The performances from Grace Caroline Currey and Virginia Gardner reflect this, as they give convincing physical performances despite the unconvincing green screen background. The downside is that they are given some weak dialogue involving an utterly unnecessary plot twist (one that can also be seen coming from a mile away, provided the viewer is paying attention). Thankfully, the script doesn’t spend too much time on it, but it does show that the filmmakers are straining for things to give these characters to do while stuck atop the tower.

What’s confounding is that with a running time of approximately 110 minutes, Fall does have the choice to cut some of this out. There are also clever ideas that play off of being stranded 2,000 feet in the air and what to do to get themselves rescued. It involves technology, not in the way one might assume, but not enough to open up a discussion on what works and doesn’t. There’s at least one decent fake-out moment of potentially being rescued, vultures circle the area at night, and some of the climbing, dropping, roping, and swinging make for thrilling acrobatic maneuvers. 1

A version of Fall that trims the first act bloat and cliché plot twists would probably play with tighter pacing and more intensity. As is, those issues are the film’s unrecoverable downfall.