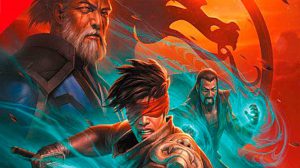 Mortal Kombat Legends: Snow Blind is a movie that only die-hard Mortal Kombat fans are likely to appreciate. It’s stuffed to the gills with over-the-top violence and callbacks to the two recent animated films before it, as well as a story that explores a warrior who isn’t as front-and-center as the rest of the series’ fighters: Kenshi (Manny Jacinto). Unfortunately, as a direct sequel to 2021’s Mortal Kombat Legends: Battle of the Realms, it lacks much of the excitement and energy of that film and the one that preceded it, Scorpion’s Revenge.

Set several years after the gory conclusion of Battle of the Realms, Snow Blind explores a dilapidated Earthrealm, a shadow of its former self. A group of bandits called The Black Dragon, led by King Kano (David Wenham), roams the wastelands, forcing their “protection” on any villages that remain following the realm’s destruction. One scouting team, consisting of Kabal (Keith Silverstein), Kira (Courtenay Taylor), and Kobra (Yuri Lowenthal), suss out Kuai Liang (Ron Yuan), the now-former Sub-Zero.

Liang leads the troops to a cocky young warrior named Kenshi, seemingly the only one willing to stand up to The Black Dragon. Kenshi writes checks his fighting ability can’t cash, and finds himself in the middle of a scheme by Shang Tsung (Artt Butler) concocted to deceive Kenshi and steal his ancestral sword, Sento. This all unravels into a showdown between two groups – one generally good and one generally evil – in a battle for Earthrealm and the wasteland, as well as time itself.

But where Battle of the Realms presented itself as a straightforward battle royale between some of Mortal Kombat’s titans, Snow Blind feels like more of a Mad Max-styled post-apocalyptic thriller than an extension of a richly detailed video game universe. It’s frustrating, because there are flickers of greatness woven throughout, especially when it comes to weaving a story around one of Mortal Kombat’s lesser-known personalities.

On one hand, centering the plot mostly around Kenshi is a smart move. He remains the central pulse in the film from start to finish, and it’s truly compelling to watch him grow from a scrappy brawler to a warrior hardened by adversity. His arrogant nature imbues him with the kind of overconfidence that can only be cured by a swift and horrible humbling. That comes in the form of the permanent blindness he suffers when the villainous Mortal Kombat mainstay Shang Tsung uses him to open the Well of Souls, a well containing the horrors and spirits of Kenshi’s ancestors to retrieve Sento. Kenshi’s skills aren’t up to snuff, despite how highly he thinks about himself, and he’s constantly being forced to re-evaluate his position in the world. This makes for some interesting predicaments that are truly engaging to watch.

But Snow Blind spends too much time elsewhere away from Kenshi when we’ve already been drawn in and want to learn more about him. The end result is a muddled mess of plot between Kenshi’s growth as a warrior and Kano’s downfall. There are countless brawls between lesser characters like Ferra/Torr, Drahmin, and Erron Black as well as The Black Dragon’s sub-units, but in the end all you really want to see is Kenshi improve and Kano defeated, not his underlings repeatedly challenged — and much of that feels like filler in a movie that wants badly to focus on the apocalyptic qualities of Earthrealm instead of the players working to defend it.

These battles boil down to a predictable series of encounters and ultimately steer Snow Blind toward familiar fare. A young warrior must learn to be humble if he wants to succeed so he can defeat a great enemy, meeting new faces and learning new abilities along the way. Except it’s so thoroughly peppered with other battles that that story doesn’t have time to breathe.

Visually, Snow Blind misses the mark. It does an admirable job of illustrating the bleak desert wasteland that most of Earthrealm now inhabits. But that comes with a price: bland, brown-and-tan environments that permeate the entirety of the movie. The only exceptions are the neon-green hues of the Well of Souls and certain snowy landscapes later on. Unfortunately, the character designs don’t fare much better. Their ultra-stylized appearances, combined with harsh, angular faces and bodies, feel cheap and uninspired. Mortal Kombat has always employed a distinct visual style, so to see that go away in favor of these illustrations is disappointing.

That said, the abundance of battles are animated well, with a fluidity that feels almost out of place for the low-quality character designs. In the opening moments alone, Erron Black grinds his motorcycle’s tire into an unsuspecting civilian’s head, leaving little more than mush. Unsuspecting victims find their spines ripped out of their bodies and hooks embedded in their heads. It’s a veritable ballet of destruction that’s on par with the Mortal Kombat games as well as more recent adult animation like Castlevania and The Legend of Vox Machina, and it works well here.

The Verdict
Vicious, power-mad Kano is determined to take over Earthrealm, one soul at a time. Assisted by a trio of cold-blooded Black Dragon mercenaries, he embarks on a brutal assault from town to defenseless town. The choice is simple: Kneel or be annihilated. But when the cocky and talented but undisciplined Kenshi doesn’t take a knee, Kano and his clan destroy the young warrior, taking his eyesight and his confidence. Under the tutelage of reluctant, retired Kuai Liang, the only one powerful enough to challenge the malevolent Kano, Kenshi finds renewed hope and a clear path to redemption. But will it be enough to stop Kano from decimating all of Earthrealm?