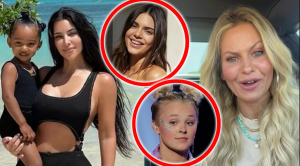 JoJo Siwa is living out her dream. The 19-year-old former Dance Moms star is taking her talents to the big screen. She recently announced her new role in the upcoming horror movie Sketch.

JoJo took to Instagram to share a teaser of the film with the caption, “One of my dreams was to be in a horror movie…. And now it’s looking like the best nightmare of my life.”

In the brief teaser, JoJo’s arms and legs were tied with rope as she lay on a train track. A person wearing a cat mask walked onto the track, pulling a cartoon sketch of an opening of a tunnel moments before the train popped out of the drawing and ran JoJo over.

She wasn’t the only person on the receiving end of Nip’s destruction. Blood Relatives star Victoria Moroles was the cat’s first victim. A teaser followed Nip as he dragged Victoria’s face into a cartoon sketch of toxic chemicals.

The Colton Tran-directed film is produced by Drew Pokorny and former NSYNC singer Lance Bass. Details about the film’s trailers and official release date have yet to be announced, but it appears that the film’s Instagram account will be packed with more updates as they are released.

While Sketch marks JoJo’s first time starring in a horror movie, she previously appeared in Nickelodeon’s 2017 Ultimate Halloween Haunted House, a 30-minute film that followed the network’s stars as they made their way through a haunted house.