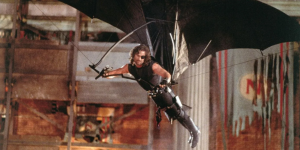 Throughout the history of film, there are few directors who have the right to the title as king of their genre. John Ford dominated westerns, Mel Brooks ran away with comedies, and John Carpenter claimed the crown as the king of horror. The man has directed twenty-one feature films, eleven of which are horror (or at least horror adjacent). He didn’t invent the genre, but he certainly popularized the slasher craze that took the world by storm for decades with the release of 1978’s Halloween.

From there, he would go on to make other horror films like The Fog, In the Mouth of Madness, and The Thing, his masterpiece. Throughout a prolific career, the director did not only direct horror films. Carpenter would leave his mark on many genres – sci-fi, comedy, thriller, and action. Behind Halloween and The Thing, what is probably seen as Carpenter’s most beloved film is Escape from New York. The 1981 dystopian sci-fi action classic doesn’t exactly have the most thrilling sequences ever put to screen, but it is just about one of the coolest movies ever made. The film makes for an amazing elevator pitch, has a cold as ice tone, and is led by the most badass actor to ever play the game with Kurt Russell as Snake Plissken. Escape rules, so needless to say, fans in the 90s were ecstatic when word got out that an L.A.-based sequel was on the way. What came to pass though was a complete and total misfire, one that is so confident in its stupidity that it is impossible to have a bad time.

It’s hard to find a Carpenter film to be brutally devoid of fun or entertainment. The man isn’t setting out to make pretentious drivel, he aims to provide commercial movies for a wide audience. Enter Escape from LA, a movie that strives to be the most badass action movie on the planet, yet fumbles the ball so incredibly hard that you wonder if it did so on purpose.

What Works About ‘Escape from L.A.’?
To start with the out-and-out positives, Kurt Russell still rocks as Snake. It’s like he walked off the set on the last day of New York and onto day one of L.A. This sequel was released 16 years after the original. You might come in expecting an accidental parody in his performance of the Snake character, but against all odds, the man lands it. He acts as a perfect composite of early 80s action archetype tossed into a bizarre 90s wasteland. And even after all this time, Snake remains forever angry. However, he seems more annoyed than anything this time around, almost like a fish out of water amongst all the cheesiness around him. Sure, Snake is a bit of a cheesy character himself, but he’s a character that will always continue to work as long as Russell is in the role. In this current era of bringing back legacy characters, it might be a real blast seeing him back on the saddle one more time.

Expectations Matter When Watching ‘Escape from L.A.’
So the lead of L.A. works, does anything else? It totally depends on the way you come at the film. If you watch it expecting a film with the exact same tone and execution as its predecessor, you’re bound to be disappointed. Escape from New York has some hoaky dialogue, over the top characters, middling special effects, but it works through and through as a perfect product of its time. Its sequel is a product of its time, but in the ways that things in the 90s could be so lame and totally charming all at once. The costumes are a crock pot of different eras in search of a cool new look, the soundtrack is way too on the nose, and the dialogue is its own brand of cringe-worthy cheese. It’s at that tacky point where filmmakers leaned in to the convenience of CGI and green screen way too heavily. Unless you had the best of the best working on your movie, your film’s visuals would age like expired milk. That being said, L.A.’s sheer confidence in itself is so strong that when Snake is surfing on a massive CG wave in pursuit of Eddie’ (Steve Buscemi) car, you can’t help but laugh and get wrapped up in the moment.

The film has a star studded cast with Peter Fonda, Steve Buscemi, Pam Grier, Cliff Robertson, and many more at its disposal. Even Bruce Campbell has a bit of an extended cameo! In return, the audience is delivered performances that are all kinds of wild, nearing nap time, or just flat out misused. Like many elements in the movie, the many supporting actors and glorified cameos are sort of amazing no matter how good or bad they are. Almost everyone feels like they were directed by a different director. Peter Fonda is going full goof-fest, Steve Buscemi just got out of a bed on the set of a 30s comedy, and Bruce Campbell plays a maniacal surgeon that’s kind of… boring? It’s one of the movie’s only surefire mishaps. Campbell is one of genre cinema’s most beloved actor and is known for his physical performances, but here, he’s totally dialed back and made unrecognizable under heaps of makeup. It’s strange, but so is this movie, so it adds up. L.A. is also a blast to watch with other movie loving friends. It gives you plenty of familiar faces to spot, then laugh in bewilderment at the strange nature of each of the performances.

‘Escape from L.A.’s Tone Is Disjointed
The tone in Escape from L.A. is a bizarre combination of an attempt at break neck action thrills with a lack of any real pacing or trimming in its editing. The movie has the guise of being fast-paced by jumping around to various famous L.A. sites and being thrown into several setpieces. The story even has enough meat on its bones to feel as though you’re running and gunning right there with Snake, but when in the midst of these scenes, everything feels sluggish. Many of the action scenes move at a snail’s pace and are shot in wide coverage. It makes for the feeling that Carpenter didn’t really know how he would go about shooting these shots in an interesting way, so he ends up placing the camera far away in an indifferent hope of capturing something exciting. Even in the movie’s more low-key moments, Carpenter leaves way too much room at the beginning and end of several shots. There is an awkward, hilarious air before and after everything on screen that makes almost every element of the film feel like a false start to a race. Just when you think an actor is about to speak or a stunt is about to be performed, it’s like watching some people stumble over the starting line, catch themselves, then proceed accordingly.

That Eddie Moment Is a Massive Misfire
There is one moment in particular that displays this film’s mishandled sense of action filmmaking. At one point, Steve Buscemi’s character Eddie has a gun held up to his head and he winces in fear. This would typically call for an exciting change of pace in the film’s edit, seeing as Eddie is facing an unexpected threat. Instead, there’s about a second of fat at the beginning of the shot where it feels like our actors are standing around in anticipation of hearing Carpenter call “action”. The gunman slowly raises his gun, Eddie cartoonishly reacts way too late, and just about the least thrilling explosion ever put to screen erupts in the background. You might expect Carpenter to call “cut” as soon as the explosion happens, but we get another second of fat at the back end of the shot. The shot feels like a take that would be left on the cutting room floor, but here it is in the film’s final cut. Moments like this are usually frustrating in other films due to a sense of incompetance, but Carpenter is one of the masters in pop filmmaking. We know he is one of the greats, so seeing him confusingly mishandle what should have been a great action movie just ends up hilarious. The finished product doesn’t feel incompetent, it just feels like a massive misfire.

‘Escape from L.A.’s Score Doesn’t Help Matters
One thing that really takes away from Carpenter’s later films is the secret sauce to so many of his greatest works – the lack of his original, minimalist scores. Carpenter was a master at creating moody, simple soundtracks that were married perfectly with his films’ stories and visuals. That changes in the 90s. None of the action scenes in Escape from L.A. are positively enhanced by the movie’s hard rock and metal soundtrack, but it does add to the campy and questionably hilarious nature of the movie’s feel. The musical pivot to have metal soundtrack several movies in a row is the one thing that makes Carpenter feel truly out of touch in the 90s. Thankfully, with his recent Lost Themes albums, return to film scoring, and foray into performing his works live, Carpenter seems to have realized how great his earlier scores really were.

John Carpenter will forever be known as a master in genre filmmaking. Between every high and every low, you can feel his independent spirit and unique vision at play, leaving a charming footprint within every effort. Sure, his later films are less successful in their understandings of tone and pace, but they’re never boring. Even at Escape from L.A.’s lowest lows, you can still feel everybody on set having fun. A film might require strong storytelling and production value to be considered a success, but a movie doesn’t need that. All a movie has to be is confident in its ability to entertain, something John Carpenter has never struggled with. While Escape from L.A. might be a bad film, it will forever be a hilarious, headstrong, endlessly entertaining movie.