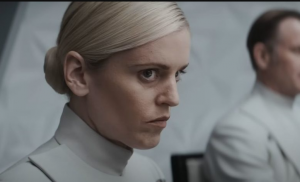 Andor has shown the Galactic Empire’s infrastructure in ways that we haven’t seen before in the Star Wars franchise. During this phase in the timeline, the Empire is rapidly expanding as Emperor Palpatine (Ian McDiarmid) plans to dissolve the Imperial Senate. While corporate entities like the Pre-Mor authority are given control over some star systems on the outskirts of the galaxy, the Empire steps in to assume control after the incident on Ferrix.

We’re seeing the rise of the Empire through the perspective of the Imperial Security Bureau. The ISB is keen to squash any potential threats with swift force. Although it’s impossible to sympathize with anyone working with the Empire, it’s hard not to root for Dedra Meero (Denise Gough) a little bit. Compared to incompetent Pre-Mor lackies like Syril Karn (Kyle Soller), Meero is pretty great at her job, and finally sees her efforts rewarded. Meero is given control over the investigation into the Ferrix incident after she clashes with her fellow supervisor, Inspector Blevin (Ben Bailey Smith).

Dedra Meero Works Harder Than Her Fellow ISB Officers
Meero has been attempting to stand out to her supervisor, Major Partagaz (Anton Lesser), by showing that she has the initiative to run her own investigations. Although Partagaz and the council are initially skeptical about Meero’s theory, she is able to prove in “Announcement” that her thesis is correct. The rebels are striking coordinated heists on Imperial military bases; they’re not just a band of independent groups as Blevin suspects.

Seeing Blevin scolded in front of his peers is rewarding, because he’s managed to be a thorn in everyone’s side. Even though he scolds Syril and the other Pre-Mor officers for screwing up the situation on Ferrix, he doesn’t bother to investigate on his own at all. Blevin is an example of the prideful, arrogant attitude that has become so common within the Empire. There is such a strong adherence to the chain of command that the rebels are able to outwit them. Blevin’s callous attitude towards Meero is treated with gravity because of his rank, not his skills.

It’s implied through Meero’s conversation with Partagaz that she is not from the same wealthy upbringing that her peers on the council had. She rose through the ranks by working as an enforcer in outer worlds before landing the position on Coruscant. Meero wants to stand out, and she’s not afraid to cut a few corners in order to do so. Although Blevin criticizes her for investigating his territory, Partagaz praises Merro after she boldly stands up to the council.

Dedra’s Background Is Still Mysterious
We don’t know much about Meero’s backstory, but given her relative youth, it’s likely that the Empire has been in control for nearly her entire life. If she really was serving on backwater planets overrun by crime cartels like Crimson Dawn or the Hutts, then the precision of the Empire sounds pretty appealing. It’s also indicated that the Empire doesn’t share a lot of information with those in its ranks; top-secret projects like the Death Star are under a shroud of secrecy. Meero likely has no idea the extent to which the Empire has tarnished the galaxy.

It’s also suggested that the Imperials have complete control over public information channels like the HoloNews. Mon Mothma (Genevieve O’Reilly) even tells Tay Kolma (Ben Miles) that the Empire has conflated any suspected rebels with sympathizers of the Confederacy of Independent Systems. Whatever Meero is hearing about the rebels is likely heavily edited, and based on what she’s heard, Cassian (Diego Luna) and his allies are terrorists. She feels frustrated that she isn’t able to dig any deeper simply because Ferrix isn’t officially under her control; as she points out to Partagaz, these rebels don’t pay attention to the lines on a map.

Andor Offers a Less Black-and-White Story
In Rogue One: A Star Wars Story, Cassian famously says that “we’ve all done terrible things for the rebellion.” This is a thesis that Andor has fleshed out. We see in “Reckoning” that Luthen Rael (Stellan Skarsgard) is willing to execute Syril in cold blood, and it’s Cassian who ultimately stops him. His ruthlessness then extends to Cassian himself once the Aldhani mission is over. There are also more radical rebel groups out there, such as the unit working for Saw Gerrera (Forest Whitaker). It’s clear that not all the rebels are as honorable as the heroes of the original trilogy. They’re still a disorganized alliance that selfish mercenaries like Arvel Skeen (Ebon Moss-Bachrach) can infiltrate.

Andor feels like a breath of fresh air in the Star Wars saga because it shows the complexity within the conflict. Cassian, Mothma, Rael, and Syril are all compelling in their own ways, but each of them have their negative attributes. Rooting for Meero doesn’t mean you’re against the rebels; it just means that things will be more exciting once they come into conflict.