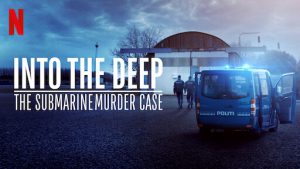 The New Netflix documentary Into the Deep explores the Submarine Murder case of Swedish Journalist Kim Wall, by Danish Inventor Peter Madsen. It offers a deeper insight into the chain of events that led to the horrifying end.

The documentary is directed by Filmmaker Emma Sullivan and has a runtime of one hour and twenty-seven minutes.

As pointed out by the director, the initial purpose of the documentary was to follow and cover the workings of Danish inventor and entrepreneur Peter Madsen. The director wrote to him about the project and was soon taken on board. However, everything changed on the 10th of August 2017, when Peter disappeared with journalist Kim Wall inside the submarine.

The documentary has a non-linear pattern that constantly switches back and forth, starting from the day of the disappearance. We learn the chronology of the events as they happened, along with the result of the final trial. Notably, with this approach, the documentary will keep you invested and attached to the minute observations.

Along with Peter, the documentary also features a team of his interns and friends, that go through a serious transition of processing the events. In the footage before the day of the disappearance, we can see them describing Peter as an enthusiastic and passionate man. Moreover, they also hail Peter in some regards but definitely mention his shortcomings because, for them, Peter is almost like a jigsaw puzzle.

They do their job and leave the so-called crazy genius with his inventions. However, it is only after the disappearance of the journalist, that the pieces of the jigsaw come together.

It is important to note that the film footage was instrumental in the court proceedings following the trial. This is why there are many moments in the documentary which foreshadow the real nature of Peter and his brutal crime. Alas, everything only makes sense after the crime is committed.

Into the Deep will make you question many different things. Starting with a basic understanding of human nature and its duality. For instance, the vicious side of Peter is revealed layer by layer in the documentary. At first, he appears as a charmingly polite character, and then later a ruthless psychopath. The real-life depiction of events will surely give you the chills and horrific insights.

Based on true events, this crime documentary is an unsettling watch. Which is definitely not designed for the faint-hearted. The documentary explores serious and sensitive themes and is an exceptional piece of investigative cinema. All in all, this Netflix documentary will definitely leave an effect on you.

You can stream Into the Deep on Netflix. Tell us your thoughts regarding the documentary in the comment section below.