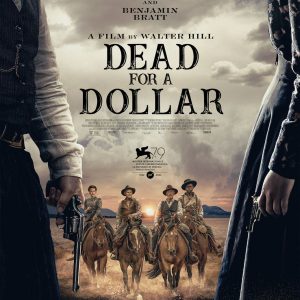 Director Walter Hill is 80 years old, so unless he cranks out something real good real fast, his most widely remembered directing effort will be the 1982 Eddie Murphy-Nick Nolte action comedy 48 Hrs. That would be a shame because the film, while terrific, is hardly Hill’s most accomplished work. His 1979 cult classic The Warriors is a better-helmed film, and 1978’s The Driver is the best car movie you’ve never seen. But it’s his Westerns—the plodding Dead For A Dollar notwithstanding—that have earned him a place in the directing firmament. His most notable Westerns, like the pilot for HBO’s Deadwood and the 1980 drama The Long Riders, galloped into town on a familiar-looking horse, and their laconic frontier energy and blasts of violence ably split the difference between reverent tradition and bold revisionism.

In Dead For A Dollar, Hill neither revisits the visual extremes he flirted with in 1995’s Wild Bill nor does he honor his mentor, director Sam Peckinpah, with balletic brutality rendered in slow-motion. Where Hill seems to be going, other than nowhere fast, is revealed in a closing credit page that reads: In Memory of Budd Boetticher. An unsung B-movie helmer who was briefly a matador in Mexico before turning to film, Boetticher is best known for his Old West dramas starring cowboy icon Randolph Scott, most notably 1957’s The Tall T and 1960’s Comanche Station. His films were simple in style yet more psychologically probing than they’re given credit for. Boetticher once boiled down the allure of the Western by saying “a man has a job to do, or a couple of men. They try to do it against tremendous odds. They do it.’’ And that brings us to Dead For A Dollar, about a bounty hunter named Max Borlund who has a job to do, and he does it.

Borlund, the film’s Randolph Scott stand-in, is played by a stoic and ill-fitting Christoph Waltz, his trademark twinkle and sly grin erased by the pressures of being a man of honor living in 1897. Borlund has been hired by “prominent businessman” Martin Kidd (a very fine Hamish Linklater) to find his wife, Rachel (Rachel Brosnahan), who’s been kidnapped by buffalo soldier Elijah Jones (Brandon Scott). Jones has a three-week head start on any pursuers, but Borlund is assigned a fellow buffalo soldier named Alonzo Poe (Warren Burke) to help with the search.

Speaking of which, if all this sounds like it could be a riff on The Searchers, Hill, who co-wrote the Dead For A Dollar script with Matt Harris, doesn’t take the bait. In fact, he barely nibbles at it, which leaves some promising social commentary on the table. A handful of scenes are given to Elijah and Poe, which Hill mostly wastes by assiduously skirting the racial issues of the time. Only Poe’s brief bullwhip fight has any sting, as a Black man turns a weapon of torment back on his white tormentor. Rachel comes off better. She’s a severe-looking teacher with a derringer whose ultimate motives give her some agency, although Brosnahan can’t find much nuance in it.

The movie’s visuals are captured in John Ford-approved widescreen, which means plenty of boilerplate, if beautiful, shots of the endless plains. Otherwise, its look is Boetticher-simple yet too digitally smooth and lacking in grit. Many of the interiors look like mint-condition stage sets. The blocking for the final shootout sees Borlund mostly standing in wide-open areas yet never getting shot. This High Noon-style climax provides a contact high of double-barreled violence, even if we don’t care a whit about what happens to anyone.

Indeed, rarely has so little tension been generated by a hero with so many bad guys lining up to kill him. Willem Dafoe has a grand old time as Joe Cribbens, a Texas horse thief locked up by Borlund five years earlier. Their opening confrontation suggests he’s the film’s major villain. Instead, the boss fight pits Borlund against Mexican BMOC Tiberio (Benjamin Bratt, also having fun), whose advance man, Esteban, is played by a perfectly cast Luis Chávez. Hill liberally moves these chess pieces around as alliances shift and lies are uncovered, allowing everyone the chance to reveal or reclaim their moral good standing, including the Mexican authorities, who rarely come off well in Westerns. But if this is Hill being revisionist then we need to redefine the word because mostly characters are just coming and going, living and dying, as needed, instead of pushing any particular boundaries.

Ultimately, Hill performs his duties like a man for hire in Dead For A Dollar, much like Max Borland is a man for hire down in Mexico. Hill has lent his lean, masculine style to a surprisingly diverse number of movies, including the 1985 Richard Pryor quote-unquote comedy, Brewster’s Millions, and the 2000 sci-fi dud Supernova (which he quit in post-production and had his name removed from). But bringing so little to the genre he’s most associated with is especially disappointing. As Hill, the Emmy-winning producer of the 2006 Western miniseries Broken Trail once recounted, “The old-time actors used to say if you have the right horse and the right hat the rest was downhill.” With Hill’s Dead for a Dollar, that turns out to be untrue. Although he may want to take note of the part about going downhill.