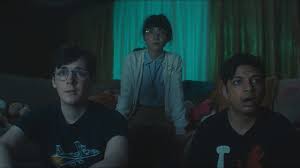 Quinn Lord, Ronak Gandhi, and Christina Higa will be starring in this love letter to Japanese pop culture. Here’s what to know about Ike Boys!

ke Boys is an action-packed adventure full of Japanese pop culture references, anime-style animation, and sequences reminiscent of Scott Pilgrim vs. The World. Starring Quinn Lord (The Man in the High Castle), Ronak Gandhi (The Rookie), and Christina Higa (Am I OK?) as underdog, Japan-obsessed best friends Shawn and Vik, Ike Boys promises a coming-of-age story for fans of ’90s nostalgia and anime. Being an anime fan in 1999 was tough — sourcing taped episodes of un-subtitled shows and having them imported from Japan was no easy task. Coupled with the rarity of the film the Otaku protagonists manage to find, it’s no wonder such a tape would thrust them into a perilous, prophecy-driven adventure.

Directed by Eric McEver, Ike Boys saw great success in the festival circuit. It made its world premiere at Fantastic Fest 2021 and premiered internationally at Bucheon International Film Festival before being acquired for distribution by Shout! Studios. After rave reviews from festival goers and a trailer that promises a ’90s anime superhero adventure in real life, we can’t wait to see what Ike Boys has in store.

Anime fans should be sure to check it out when released. Here’s everything we know and expect to see from Ike Boys.

Ike Boys: The Plot
Set in 1999, Ike Boys takes place in a small Oklahoma town where anime is hard to come by. Best friends Shawn Gunderson and Vikram ‘Vik’ Kapoor receive a package with a forgotten anime by a beloved director, which holds a prophecy for the end of the world. Once Shawn, Vik, and Miki Shimizu watch the film, they discover they have been gifted the same superpowers as the protagonists in the anime.

With the prophecy set in motion and the last days of the Millennium approaching, Shawn, Vik, and Miki must learn to use their powers before an evil being comes to end the world. Featuring kaiju, anime, plenty of Japanese pop culture references, and Tokusatsu effects, Ike Boys is an action-packed film you won’t want to miss!

The synopsis for Ike Boys is as follows:

“Best friends Shawn Gunderson and Vikram ‘Vik’ Kapoor escape from the drudgery of high school life in Oklahoma through their obsession with all things Japanese. When a mysterious anime film transforms them into its superhuman characters, they at first think that their wildest fantasies have come true. But when ancient monsters threaten to unleash the apocalypse on New Year’s Eve of 1999, Shawn and Vik must look to each other to become the heroes they were always meant to be. Joining their adventure is Miki, a Japanese exchange student whose determination to go on a Native American vision quest puts her on a collision course with both Shawn and Vik and their foes… and whose destiny may determine the fate of the world.”

With so much riding on three anime-loving teens, the question of whether they can save the world is a tough one to answer. Between classes, getting pushed around by high school bullies, and having to hide their newfound powers from nosy parents, it’s clear Ike Boys will appeal to all fans of coming-of-age adventures — especially ones where giant kaiju wreak havoc.

Ike Boys was directed by Eric McEver, written by McEver and Jeff Hammer (American Gadfly, Live or Die in La Honda), and produced by Hammer, Brion Hambel, and Paul Jensen (Better Watch Out).

Ike Boys: A Love Letter to Japanese Pop Culture
Ike Boys not only features a fantastical anime-inspired plot but original 2D animated sections in stunning full color! The trailer teases several clips of ’90s anime-inspired superhero action, showing off the designs of the main characters and their prophesied enemies. The giant skeletal kaiju that wreak havoc in one animated section are reminiscent of those from Siamese’s music video for their song “Mr. Fear,” which was animated by the talented Rudo Co. The hero designs are very nostalgic, hearkening back to popular animes such as Gurren Lagann, Sailor Moon, and, recently, My Hero Academia. The live-action and anime sequences feature the same costumes, effectively blending the two styles and universes within the film. With so many anime references, Ike Boys is sure to appeal to fans of all ages.

Ike Boys made great efforts to include Japanese pop culture nostalgia wherever possible, including in its fight scenes. Actors perform traditional Japanese practical effect fighting called Tokusatsu. This style of stage fighting is most notably seen in Mighty Morphin Power Rangers and many kaiju films such as the original Godzilla.

With so much loving detail in the film’s direction, we can’t wait to see Ike Boys when it’s released!

Release Date
Ike Boys is set to release on October 11th, 2022. It will have a Digital and On Demand release across all major streaming platforms.