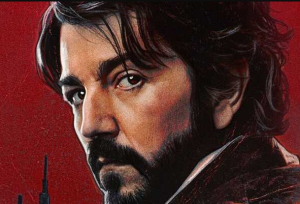 All that time working prison labor may actually be good for Cassian Andor.

Cassian Andor (Diego Luna) can’t seem to catch a break. In the latest episode of Andor, “Narkina 5”, our hero-in-the-making is shipped off by the Empire to a factory facility, where he will serve his six-year sentence after being arrested for looking suspicious in the previous chapter, “Announcement.” While this is weirdly funny in itself — given that he had countless reasons to be arrested, but was actually arrested for the only reason that isn’t a real one — his time in the Imperial forced labor facility might end up being beneficial to him and his future as a rebel spy.

The work itself might not seem that brutal at first. When thinking about forced labor, we usually picture people on vast mines, under a scalding sun, with little food or water. But Narkina 5 is definitely not like that. The prisoners have their own cells with access to as much nourishment and water as they want, and live in a controlled environment designed to extract their best possible performances. Which is not to say it easy, as there is a huge catch: they have brutal quotas to fill and work in teams of seven inmates against their other peers. If they lag behind on production, they get fried by the facility’s magnetic floors.

What are they building? We don’t know yet, but, if one had to guess, it would be parts for the Death Star. Which would be ironic, as it would mean Cassian is helping build the very thing that he will help destroy… And that will end up killing him later in Rogue One: A Star Wars Story. Even if that is confirmed to be the case, though, the forced labor facility promises to be a place where Cassian might pick up some very important skills and make alliances for his future.

Timing Is Everything
At this point, Cassian is a smart troublemaker, but still a lousy person who doesn’t know how to be careful. He lacks discipline and doesn’t know how to think a few steps ahead, something that’s an essential trait for someone who intends to spend his life as a fugitive. He doesn’t know how to mask his emotions either, and the combination of all these factors is precisely what got him in Narkina 5 in the first place. Of course, he was instrumental on the Aldhani robbery, but that team was something different, with different motivations. Now, the motivation is simpler: work together in synchrony and don’t get fried.

In prison, Cassian is part of Unit Five-Two-D, led by fellow inmate Kino Loy (Andy Serkis). There are 49 rooms operating the same way, each competing against one another to see which one can make the most parts in the most productive way. The competition also happens inside each unit: each has seven tables, with seven people working, and the one that lags behind gets fried. Simple. Loy’s mission is to keep everybody working properly at all times.

Cassian starts at the last table, exactly the one that has been lagging behind in productivity. His six partners are desperate not to finish the shift last place, as it doesn’t matter if they were a man short up to that point. What’s important is making as many parts in the shortest time possible, the conditions they are in don’t matter. Cassian takes Jemboc’s (Brian Bovell) place, as he has been performing two roles as of late, and quickly fits in the team.

In a span of 30 days, their table gets from last to one of the top tables in the unit. We know Cassian is a fast learner, but he lacks focus. In Narkina 5, focus is the only thing he needs to have, so his table’s ascension is only natural. With each team member performing their task in synchrony, their productivity level spikes up. Cassian does his part, then the next man does his, and so on, the table working like a clock in a production line. For someone who couldn’t think a few steps ahead, he now needs to think six steps ahead, and that could prove a valuable skill in his future career as a spy.

Thinking a Few Steps Ahead
The work of a spy may not seem close to that of a factory worker in a production line at first, but they have more in common than we’d know. Both require teamwork skills and the understanding that you are but a cog in a bigger engine, which makes an even bigger machine work. Both require trust in your co-workers, as you need to be sure that they will perform their own tasks accordingly, because, otherwise, things will go wrong for a lot of people.

In Rogue One, we see Cassian with those skills fully developed, an essential screw in the intelligence engine of the Rebel Alliance machine. He knows how reliable his sources are, knows how to lead a team and coordinate a task. But synchrony and team work only get you so far in a rebellion, you need to have the right motivations, too.

The perfect example for how all those elements fit in Cassian’s character is the attack on the Imperial base in Scarif, in the third act of Rogue One. That mission required a perfect blend of the skills Cassian picks up on Narkina 5, along with the ideological motivations he will eventually inherit from Karis Nemik (Alex Lawther), Luthen Rael (Stellan Skarsgard), and Maarva Andor (Fiona Shaw). Even Melshi (Duncan Pow) is there, one of his fellow teammates in the Imperial factory, to lead the military part of the operation.

The Scarif mission required three different divisions to work in sync: the Rogue One crew would infiltrate the base in disguise and steal the Death Star plans, while Melshi’s military division was to create diversions along the beaches of the planet, calling the Empire’s attention away from the base itself and giving the infiltrating team time to perform their part. A while later, air cover arrived to buy them a little more time and offer them a way to beam the plans from the base to the Profundity, admiral Raddus’ (Stephen Stanton) flagship.

They did cut it close, but that is more due to the Empire’s overwhelming power than to a supposed lack of skills by the Rebels. They did the best they could with the little they had, and, despite everyone involved ultimately having to give their lives, the mission was a success, thanks to a screw that was yet to be set in the Rebellion machine: Luke Skywalker (Mark Hamill).