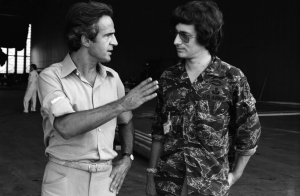 The acclaimed French filmmaker François Truffaut was never shy about voicing his opinion, even when it was less than complimentary. He first made a name for himself as a critic, but his French New Wave films like “The 400 Blows” challenged cinematic convention even further. Truffaut was unafraid to dip his toe into other areas of the film world, even acting in many of his own films. In a totally unexpected move, he also took a key supporting role in Steven Spielberg’s unforgettable sci-fi film, “Close Encounters of the Third Kind.”

In “Close Encounters,” Truffaut plays a UFO scientist working for the French government in the U.S. to track alien activity. The director had never acted in any films besides his own, but Spielberg knew he wanted him for the role from the very start. “Truffaut was my first choice all along, but I didn’t have the courage to phone him up and ask the great French director if he would be in this newcomer’s movie,” Spielberg told Sight and Sound. “I put it off.” When the director finally did work up the courage, he was surprised when Truffaut accepted the role. “He said yes for various reasons. I don’t think particularly because he enjoyed or understood the script that well, but because the timing is right.”

Truffaut shot many of his scenes in the big stadium set by production designer Joe Alves. Alves had also worked on “Jaws” with Spielberg several years prior and was well-equipped to bring his grandiose visions to life. “In my imagination, [the scientists] had made this tremendous stadium on the other side of Devil’s Tower,” Spielberg explained ​​(via MonosonicJukeJoint). “I wanted this stadium to be like 1,000 feet long, maybe 1,500 feet long, maybe even longer than that.”

Truffaut was used to a more intimate set
The French filmmaker was a fish out of water on the set of “Close Encounters.” Truffaut was not accustomed to being in productions of such a massive physical scale. The environment was so foreign for him, he was apparently unimpressed by the set altogether, per Close Encounters… The Ultimate Visual History. There was one more modest set in “Close Encounters,” however, where Truffaut did feel at home.

When the protagonist, Roy, sees a newscast revealing Devil’s Tower, it breaks his alien investigation wide open. Spielberg later decided that another major UFO-obsessed character in the film, Jillian, should have a parallel scene where she sees the same newscast. Jillian is on the hunt for her kidnapped son in New Mexico, so Spielberg imagined her seeing the broadcast in a dingy motel room covered with her sketches of Devil’s Tower. A Southwestern motif in the room decor also acted as a nod to her location, a subtle way of telling the audience where she was.

This motel room was by far Truffaut’s favorite set in the “Close Encounters” production. “He walked on this little three-walled structure,” Alves recalled, “and he goes, ‘Oh! This is a set!” The set reminded him of the smaller ones that he worked on in his own productions, many of which were heartfelt dramas. “That was the kind of set he was used to in his own films. He liked the intimacy,” Alves continued.

But Truffaut still respected Spielberg’s choices
The stadium set was incredibly expensive, costing what Alves estimated to be around $700,000. Today, that would amount to well over three million. “The raw materials included more than ten miles of lumber, three and a half miles of steel scaffolding, two miles of fiberglass, and the mile-long tarp, as well as tons of concrete, sand, and clay fill dirt,” author Michael Klastorin reported.

Apparently, Truffaut wasn’t the only one on set who was unaccustomed to the size of the stadium. The cinematographer Vilmos Zsigmond, who is known for sprawling Westerns like “McCabe & Mrs. Miller” and “Heaven’s Gate,” said it was the biggest set he had ever worked on, and possibly even the biggest set ever made at the time. “The set was so big that you couldn’t stand in the middle and shout out to the edges,” noted the camera operator/second unit DP Steven Poster.

Building an exceptionally enormous indoor set was never Spielberg’s intention. “I wasn’t looking to build the biggest set of all time, I just remember thinking we can’t shoot outside because if it rains, we’re messed up,” he explained (via MonosonicJukeJoint). “We can’t shoot in the rain. So I began looking for the biggest indoor enclosure — looked everywhere in the world.”

Spielberg and Truffaut had very different cinematic sensibilities, but Spielberg appreciated Truffaut’s stark aesthetic taste. “He’s amazing because he’s so simple. He’s as simple as his films,” he told American Film Institute. In turn, Truffaut never stepped on the director’s toes during production. “He made suggestions occasionally, and I wanted him to make more, but he would just make them when he felt comfortable,” Spielberg admitted. Truffaut ultimately respected Spielberg and his massive sets, even if he preferred a more intimate setting.