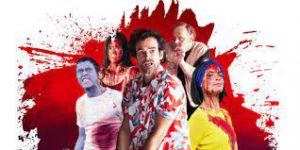 Originally planned to open the Sundance Film Festival earlier this year before the worsening Covid situation forced the festival to again go virtual, Oscar-winning writer-director Michel Hazanavicius made the right decision in insisting his comedy Final Cut (Coupez!), about the making of a low-budget bad zombie movie, should be presented with a full house in a theatre, thankfully not to be watched on your computer at a prestigious film festival. In holding out for the real thing he scored big as it was chosen as the opening-night out-of-competition film of the 75th Cannes Film Festival.

It seems entirely appropriate that a movie all about the love of making movies should signal the full return of a fest devoted to all things cinema over the course of its 75 years. And for this director, whose 2011 black-and-white silent film The Artist was also a love letter to movies, and also premiered here on its way to Best Picture and Best Director Oscars, this seems fated to be.

If Cannes was looking for a feel-good, highly entertaining comedy to kick things off in coming fully back to normal after a devastating couple of pandemic-affected years, it has found it in Final Cut (a remake of an ultra low budget 2017 Japanese hit) although you might not know it from the first half hour or so which is essentially about the making of a horrendously awful Z-grade zombie movie in which the French stars all play characters with Japanese names (don’t ask). It is indeed a bloody mess with a plot about an obsessed director making the ultimate snuff film as he discovers a location that was a Japanese killing ground in World War II and is still haunted by death. In order to get “sincerity” he doubles down when one of his actors becomes an actual zombie, infecting the entire production which descends into a horrific hell, as heads and arms fly off and actors and crew become zombie-fied themselves, all for the perfection sought by this crazed filmmaker shooting this all in real time for a live online presentation.

Hazanavicius rehearsed his actual cast over the course of five weeks in order to pull off this sequence, all in one carefully choreographed single shot (with one additional edit added). In retrospect it is an impressive technical achievement, but watching it you wonder what the director actually has in mind. Where could this thing possibly be going? After the “end credits” roll 30 minutes into the film, we soon find out when a screen shot says “one month earlier,” and the making of the making of this film about the making of the zombie movie starts to play out when a zealously enthusiastic Japanese producer named Mme Matsoda (Yoshiro Takehara) attempts to engage director Remi (Romain Duris) on her idea for a French adaptation of a “live” online Japanese zombie film she says was a huge hit in her home country. Despite initially shunning the idea as undoable, Remi is lured into it, and eventually when disaster hits his two key stars 45 minutes before showtime he also takes on the role of the director himself, as does his wife Nadia, a retired actress-turned-makeup artist who had to stop acting because she couldn’t separate her roles from real life. Hazanavicius’ actual wife, Bérénice Bejo, becomes perfect casting in all the iterations of Final Cut, even managing to look fetching with an ax in her head.

This is where Final Cut’s cleverness and charm really come into play as payoff for the first half hour, and the audience gets to see the whole thing put together, warts and all, a magic trick only possible in the movies and that, as he showed in The Artist, is confirmation of its director’s own love for filmmaking and the people in front of and behind the scenes responsible for them — and that includes ones as bad as this film-within-a-film. Even as it deals with zombies and unimaginably awful flicks, this is a tribute to cinema if ever there was one, kind of Hazanavicius’ own Day For Night, but not on the exalted level of the great 1973 Francois Truffaut love letter to making movies. Anyway, this one has zombies.

It also helps to have a terrific ensemble cast to pull off this hat trick, and led by Duris and Bejo we have one. Finnegan Oldfield as Raphael, the difficult lead actor, and Matilda Lutz as Ava, the lead actress, are both excellent, along with Sebastien Chassagne, Raphael Quenard, Gregory Gadebois, Jean-Pasal Zidi, Lyes Salem, Agnes Hurstel, Luana Bairami, Charlie Dupont and even Hazanavicius’ two daughters, Raika and Simone, the latter nicely playing the daughter of the film’s fictional director. Takehara is an absolute hoot as the Japanese producer and was in fact in the same role in that original 2017 Japanese film from Shin’ichiro Ueda, One Cut of the Dead, which clearly inspired this more elaborate remake (itself adapted from the play Ghost in the Box) that follows its template.

Alexandre Desplat supplies a perfectly pitched score, and the technical credits are aces all around both in the making of that dreadful zombie movie as well as the movie it is all about. Special shout-out to Jonathan Ricquebourg’s cinematography and the film editing from Mickael Dumontier. Hazanavicius produced along with Brahim Chioua, Alain de la Mata, Noemie Devide, Vincent Maraval and John Penotti. North American distribution should be a no-brainer.

You walk out of Final Cut with a smile on your face, and I can’t think of a better reason than that to kick off the Cannes Film Festival’s big anniversary party this year.