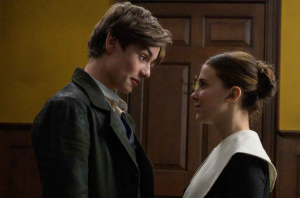 When the Netflix Original movie Enola Holmes was released on September 23, 2020, the world got its first look at a whole new protagonist within the world of Sherlock Holmes. Based on a young adult book series of the same name written by author Nancy Springer, the film saw Millie Bobby Brown bring the title character to life with humor and charm, and many were won over by her performance as the young, talented detective. Of course, Sherlock makes an appearance as well, portrayed by none other than Henry Cavill, as well as two other Holmes family members — Mycroft Holmes (Sam Claflin) and Eudoria Holmes (Helena Bonham Carter). Enola Holmes was an instant hit, so it was no surprise when Netflix announced that a second film was in development.

At first, Netflix revealed very little about the sequel, titled Enola Holmes 2, but as time goes on, small details are coming out here and there about the cast, plot, and so much more. For fans of Enola Holmes who are eager to join the teenage hero on another adventure, here’s everything there is to know about the upcoming film so far.

What Is the Enola Holmes 2 Release Date?
Enola Holmes 2 will be arriving on Netflix on November 4, 2022. Head to the movie’s landing page on the service with the following link:

Watch the Enola Holmes 2 Trailer
We’ve seen two trailers from Enola Holmes 2 so far. The first trailer was released on September 24, 2022, with the second one coming out in October. We’re not going to spoil too many details but based on the trailers, this does seem like an even more exciting story than the first one. Check out the first trailer in the player above and the latest one here:

When and Where Was Enola Holmes 2 Filmed?
While it was initially reported that Enola Holmes 2 would begin filming in September 2021, production didn’t start up until the beginning of October 2021. The upcoming movie was filmed on location in Hull, England, and in particular, a place called Hull’s Old Town, which is a small area of the city popular with tourists due to the upkeep of centuries-old cobblestone streets and buildings. This makes it super easy for period pieces like Enola Holmes 2 to transform the area into the late 1800s setting of the film series.

Henry Cavill announced that he had finished filming for the movie in November 2021. Production on the film officially wrapped in January 2022.

Who Is In the Cast of Enola Holmes 2?
As expected, Brown will be returning for the sequel as the witty young detective Enola, while both Cavill and Bonham Carter will be reprising their roles as Sherlock and Eudoria, respectively. There is no word yet on whether Claflin will be portraying Mycroft again in the sequel. Other key cast members returning are Louis Partridge, who plays Tewkesbury, Enola’s partner in crime in the first film, Adeel Akhtar as Inspector Lestrade of Scotland Yard, and Susan Wokoma as Edith.

Enola Holmes 2 will also have plenty of new faces, with announced cast members including David Thewlis, who many will recognize for prominent roles in the Harry Potter film series, Wonder Woman, and The Boy in the Striped Pajamas, as well as Sharon Duncan-Brewster from Sex Education and the acclaimed sci-fi epic Dune, and Hannah Dodd from Hulu’s Find Me in Paris. There are also Abbie Hern, Gabriel Tierney, and Serrana Su-Ling Bliss as further new additions to the franchise.

Who Are the Confirmed Characters in Enola Holmes 2?
Considering this is a movie series all about Enola, the young girl with a talent for solving mysteries will take center stage once again in the sequel. Her older brother Sherlock, who seems to open up a bit more at the end of the first film, will also appear in the sequel, though it’s unclear how big his role will be. The same goes for their mother, Eudoria.

Enola Holmes 2 will also feature the return of Sherlock’s close friend Lestrade, who must match wits with Enola in the first film as they both investigate the same case, along with the inspiring Edith, who runs a jiu-jitsu academy for women disguised as a tea shop and works with Eudoria to push for the reform bill. Last but not least, the rich yet surprisingly progressive young man Tewkesbury will be back, now an important member of the House of Lords.

There are no details yet as to how all of these characters will interact in the second film, and Netflix has not given any information yet about who the new cast members will be playing. It’s possible that a couple more actors from the first film might also be announced as returning for Enola Holmes 2, and fans of both the book series and the classic Arthur Conan Doyle stories should keep a lookout as more details about the characters are revealed to see if anyone from the original tales will be making an appearance.

What Is the Plot of Enola Holmes 2?
First thing to note, Enola Holmes 2 will have the same creative team behind the camera as the first film, with Harry Bradbeer directing and Jack Thorne writing the script. As for what sort of story Bradbeer and Thorne will be telling in the highly anticipated sequel, there aren’t many details to go off of, but based on what we do know, we can expect Enola to be causing plenty of trouble again as she investigates her new case. In the first film, one of the main plot points is the reform bill connected to the women’s suffrage movement, of which both Eudoria and Edith are heavily involved. With a main theme of the film series being women’s freedom and empowerment both through the characters and story, it’s highly likely that this plotline will be revisited in the second film in some way.

At the end of Enola Holmes, the reform bill passes in the House of Lords thanks to Tewkesbury’s key vote, which is great news for Eudoria and fellow supporters, but England of the 1800s has a lot further to go to reach equality, and it would be interesting to see the film’s progressive ideals be explored in other aspects of 19th-century life as well. Along with that, Tewkesbury’s position as a member of the House of Lords could play an important part in the sequel’s story and his involvement, though it’s unclear how political the film series aims to be. As Enola Holmes is created for audiences of all ages, we can expect the sequel to portray a similarly straightforward and entertaining story with a central mystery for Enola to solve. We can also bet on the developing romance between Enola and Tewkesbury being further developed in Enola Holmes 2, while the sibling relationship between Enola and Sherlock will also be explored more fully.

Netflix released a synopsis for the movie in February 2022, which reveals that Enola’s new case will involve her teaming up with Sherlock to find a missing girl. But, of course, there are bound to be more secrets hiding behind the surface of the disappearance. Check out the synopsis here: