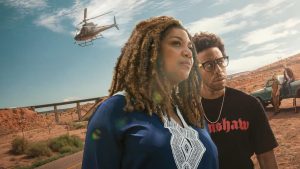 When End of the Road announced its 2020 line-up, they were set to welcome an all-star line-up of international indie stars including headliners Pixies, Bright Eyes, Angel Olsen and Big Thief. A year later, when the festival returned for 2021 after its enforced year off, these headliners were booked again, before being replaced by an all-British line-up including Stereolab and Hot Chip due to travel issues. It’s no wonder, then, that the response 2022’s overseas bill-toppers receive at the Dorset festival is rapturous.

With Pixies and Bright Eyes returning for third time lucky, while Angel Olsen and Big Thief are replaced by Fleet Foxes and Khruangbin, the four nights of music on the festival’s main – aka Woods – stage bring distinctly different moods, reflecting the eclecticism at the heart of End of the Road. Thursday kicks the festival off with a closing show from Khruangbin, who seem an unusual fit for a festival headliner, but prove a perfect one. Laura Lee, Mark Speer and Donald ‘DJ’ Johnson Jr. have an irrepressible, unique charisma and connection with one another, and they slide seamlessly through 90 minutes of virtuosic jams, screeching solos and an instrumental megamix of covers incorporating ODB, Spandau Ballet, Tina Turner and beyond.

A similar level of control is shown from Pixies on Saturday night, who put their marker down with a frankly unfair opening run of ‘Gouge Away’, ‘Wave Of Mutilation’, ‘Monkey Gone To Heaven’ and ‘Debaser’. From there, they roar through 29 (!) hits both old and new without a single word to the crowd, and depart in a roar of feedback after a job perfectly done.

Despite the international flavour of this year’s headliners, the rest of the weekend sees British acts shine brightly and stake their claim as future headliners, across all genres. An early Friday highlight comes from London’s Shovel Dance Collective, who lead a procession across the festival site and down to the main stage, occasionally stopping for an a cappella track. When they reach the stage, the nine members sit in a horseshoe and sing centuries old folk songs with reverence and beauty. As they told the crowd: “This is folk music. This is our music, this is your music, this is everyone’s music.”

Elsewhere, the weekend is littered with homegrown bands providing exhilarating twists on the rock’n’roll formula. In bdrmm and Deathcrash, shoegaze and post-rock look in safe hands, while newbies Fat Dog make a raucous noise similar to if the Fat White Family started creating gabba, and The Chisel pack melody and rage into their hardcore punk.

Punk in energy if not sound, Lynks and Grove also prove highlights, the former whipping up a packed Tipi tent into a frenzy on Saturday afternoon, while the latter forms a wall of death in the Big Top while covering Girls Aloud in a set full of jungle rhythms and intoxicating charisma. The ravers are also satisfied by a wild and exuberant late-night show from I. Jordan on Saturday, and Sunday’s Big Top set from Bristol’s SCALPING, whose live set becomes tighter, sharper, heavier and more mind-blowing with each next tweak. It’s a true assault on the senses. Porridge Radio’s Garden Stage set on Friday night might be the pick of the lot though, and surely their crowning moment yet. Dana Margolin roars her way triumphantly through an hour’s set full of mantra-like lyrics and powerful connection that suggests they could one day headline here.

For now though, it’s up to two of the 21st Century’s biggest alt-folk US exports to see us out. Friday and Sunday’s headline sets, from Fleet Foxes and Bright Eyes respectively, could reasonably be expected to throw up similar fare to each other, but turn out to be wildly different experiences. On the first full day of the festival, Robin Pecknold is all-smiles as he leads his band through a gorgeous, event-free set that spans the band’s career and sees their music fleshed out by a soaring horn section. If anything, the show is a little too clean though, and could do with some more danger.

Bright Eyes, meanwhile, close out Sunday night with a show that teeters on the edge of collapse and is all the more thrilling for it. Between songs, a heavily inebriated Conor Oberst slurs his way through rambling stories that only sometimes reach some form of conclusion. The second he and the band kick into the next tune, though, somehow he’s exemplary, not missing a lyric or a note for the whole show. It gives the performance an awkward but stirring edge, willing Conor to make it through the show while simultaneously being worried for his wellbeing.

Still, there remains no-one quite like the Bright Eyes frontman, and tonight’s renditions of ‘Poison Oak’ and ‘Old Soul Song (For The New World Order)’ are shatteringly beautiful, no matter what state they’re performed in. Flashes of lightning begin to pepper the sky towards the end of the set, but the long-expected rain waits to fall and drench the crowd until a few minutes after Conor and his band are wrapped up. He made it.