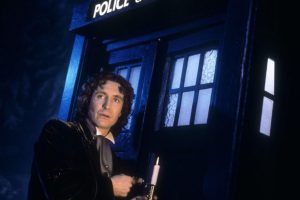 The new documentary delves into the infamous 1996 TV movie.

Had the Doctor Who TV movie (starring Paul McGan) debuted today, it’s easy to imagine the vitriol that it could have met online, considering what we see over pretty much any episode that airs, especially those that attempt to do something different.

Not that the movie got away lightly in 1996, causing fan outrage as it did for doing two shocking things: having the Doctor kiss somebody and saying that he was “half-human on my mother’s side”.

Nowadays, that might seem quaint given how the new Who has loads of kisses and revelations about the Doctor’s history. At the time though, it was deadlier than a Dalek and the TV movie, intended as a pilot to revive Doctor Who, never led to a series and was deemed a flop.

It was left with an infamous legacy, and now a new documentary, Doctor Who Am I, delves into that legacy from the viewpoint of the TV movie writer Matthew Jacobs. But this is no defence of the movie – instead, it’s about confronting that legacy, and it ends up a reminder of what it actually means to be a fan.

Given the response to the TV movie, it’s understandable that Matthew Jacobs kept away from fan events and conventions. As he puts it in the opening of Doctor Who Am I, he made “two fatal errors” (the kissing and the half-human reveal) and “thought the fans would kill me” if he ever showed up at a convention.

His friend, documentary filmmaker Vanessa Yuille, encouraged him to go to some conventions in the US though. The documentary – which is set to tour conventions and film festivals before a streaming release – sees Vanessa follow Matthew as he meets fans at these events, while also catching up with some old Doctor Who friends.

The result is an endearing and uplifting look at a side of fandom that we tend to forget, given that negative voices are always the loudest. Toxic fandom doesn’t just exist within Doctor Who, it’s there across pretty much every franchise you can imagine, but the documentary reminds you there’s a reason you obsess over a particular movie or TV show.

As Matthew observes towards the end of his year-long delve back into the fandom he thought universally hated him, the conventions we see throughout Doctor Who Am I are not really about the franchise itself. “It’s the sense of community and companionship that they find with each other,” he notes.

Matthew interacts with various fans throughout and while some of them joke about him ruining their childhood, the overall message (at least from the interviews included) is one of positivity. These fans just want to talk to somebody who was involved, if only briefly, with the show they love – whatever their feelings on the TV movie.

What really makes the documentary work though is that as much as it explores the Doctor Who fandom as a whole, it’s also an intimate look at Matthew reckoning with his own connection to Doctor Who. The title isn’t just a nod to the infamous line in the TV movie, but also a question for the writer himself.

He opens up about the death of his mother by suicide, as well as his father living with bipolar disorder. As Matthew puts it, even before he wrote the TV movie, the show was “part of that shitty childhood” as his father appeared in the Doctor Who serial The Gunfighters in 1966.

Matthew recalls being taken on that set by his father and, at one point in the documentary, it’s clear that it’s a struggle to reminisce about it when he’s asked about it on a panel. Part of his avoidance of conventions isn’t just because of the T- movie reaction, but also the fact that it could bring back old memories.

As a fan puts it in a heartbreaking moment talking about her husband’s death, Doctor Who gave her a “change to escape, instead of think”. Matthew starts to see it the same way, through his interactions with not just fans, but the people he worked with on that TV movie, including Paul McGann, Daphne Ashbrook and Eric Roberts.

It’s hard to not look back with regret at being so close to a “ticket to security” if the TV movie had succeeded, but Doctor Who Am I shows Matthew realising that there is a positive aspect to his experience. Whether he liked it or not, he was always a part of the Doctor Who community and had he gone to the conventions, he might have found comfort and hope there.

Of course, there will always be the naysayers, yet Doctor Who Am I highlights that there is always a positive side to fandom where people can connect with like-minded people, however different their lives might otherwise be.