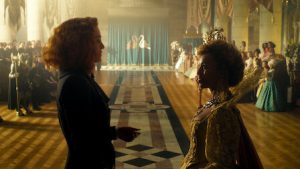 Charlize Theron is no stranger to the dark side. There’s her Oscar-winning role in 2003’s Monster, of course, playing serial killer Aileen Wuornos, and since then, we’ve seen her don various shades of scheming in everything from Snow White and the Huntsman and Prometheus, to Young Adult.

Sometimes, one villain leads to another: When Theron was finishing work on F9, the most recent Fast & Furious film, reprising her role as cyberterrorist Cipher, producer Jeff Kirschenbaum approached her at the end of a voice-recording session to talk to her about playing a different kind of evil character — one her pre-teen daughters would actually see — in Netflix’s adaptation of The School for Good and Evil based on the bestselling book series by Soman Chainani.

“Having two small kids, I always joke that they’re going to be 52 before they see most of my work,” Theron, 47, tells EW. “I could see the glimmer in their eye when I told them that I’m doing this movie that’s super-fantastical and deals with villains and princesses. I started reading the books with my girls, and they were just over the moon about it. I’ve never had that experience with them — they were just so enthralled, which made me excited.”

The School for Good and Evil tells the story of two best friends, Sophie (Sophia Anne Caruso) and Agatha (Sofia Wylie), who find themselves suddenly on opposing sides at an enchanted school that trains both heroes and villains to preserve the balance of good versus evil. The villains are taught by Lady Lesso (Theron), and the heroes are taught by Professor Clarissa Dovey (Kerry Washington), with the School Master (Laurence Fishburne) watching over them all.

It’s a reunion for Theron and director Paul Feig, who originally met while working on Arrested Development in 2005, and it was the promise of working with Feig that drew costar Washington, who calls Bridesmaids one of her favorite movies of all time. “But the idea of working with Charlize was the most exciting, so it was an easy yes,” she adds.

When Theron and Washington met each other on set in Belfast, they connected instantly over being mothers of young children. “When moms in this business meet each other, it’s like an unspoken thing,” the Fury Road star says. “We just look at each other and we see each other’s exhaustion and we go, ‘I get you. You get me.'”

But it was Washington’s “effortless” way of acting that blew Theron away. “I remember the first couple of days, I was kind of still finding the voice of my character,” Theron recalls. “And she was just so confident and committed. I was watching it from afar going, ‘Oh s—, I’ve got to sort my s— out really fast.’ I was intimidated.”

Washington had “vaguely” known about the book series before she signed on to the adaptation, but it wasn’t until she actually read the first one that she realized Professor Dovey was unlike anything she’d ever played before. “I’d never even done a fantasy film before, so the whole genre was really new for me,” Washington says. “She’s just so larger than life and filled with light, and has a lot of comedic beats.”

Accordingly, the Scandal actress decided to pull from some real-life inspiration to help her ground the character. “I thought a lot about the archetype of fairy godmothers and finishing schools, and one of my teachers at Spence growing up in New York at an all-girls school, where you would learn to be a proper young lady,” she says.

Once Washington had her foundation for Professor Dovey, she decided to just let loose and have fun playing the lighter half to Theron’s darker Lady Lesso, the angel to Theron’s devil. “That was really fun to get to poke at each other and play opposite ends of the spectrum in terms of how we live in the world,” Washington says. “It was so much fun to play extremes against each other.”

But School ultimately digs deeper into what it means to be good and evil, rather than sticking to stereotypical definitions.

“It’s pointing at something that’s incredibly needed right now,” Theron says. “We are living in a time right now where you want to compartmentalize things in a way that just isn’t part of life — it’s not part of the human experience, but it’s coming from a place of fear and not knowing. There’s safety in trying to label and compartmentalize things, right? If we know what’s good and we know what’s bad, then we can gauge and control that. This story is really beautiful in reminding us that’s not how the world works and that we are all way more complicated than that. It’s about empathy, and understanding that we are not just black and white.”

Washington adds, “Even though these characters live in a world that wants to make good and evil this very binary idea, the story really proves that it’s not. Goodness and evil are much more nuanced than that. For me, that was the reason to do it, because it really challenges us to be more willing to live in the gray. Most of us live somewhere in the gray and have the potential for both good and evil.”

Still, there was nothing gray about the way Theron treated the antique walking sticks Feig lent her as a prop. “When I landed in Belfast, I had my last fitting, and Paul was standing in the fitting room with a walking stick and he handed it over to me,” she remembers. “I looked in the mirror and I went, ‘Oh, my God.’ I loved it. It was a little bit like when Julia Roberts gets the jewelry box in Pretty Woman. I was all giddy. It was magical. But I broke two of his walking sticks.”

Theron laughs as she continues: “I kept slamming them into desks and being really mean with them. I had to send them off to this very far away place in London — an underground place that refurbishes old canes.”