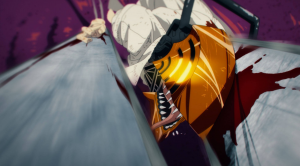 One of the most exciting recent pieces of anime news was the announcement that Chainsaw Man, one of the most popular manga series currently running, is being turned into an anime by MAPPA Studios and available to western audiences through the Crunchyroll streaming service. Now, we finally have trailers for this new anime and its premiere is almost upon us. Seeing Chainsaw Man’s violent and darkly humorous story translated to screen by MAPPA should be a treat for both new and old fans alike. Here’s everything you need to know about the anime series.

What Is Chainsaw Man About?
Taking place in a world quite unlike ours, Chainsaw Man follows Denji, a murdered human who has been brought back to life by his demon dog Pochita and forced to merge with a creature called a Chainsaw Devil to survive. Denji promptly uses these powers to take revenge on the Yakuza members that trapped his family in poverty and caused his death.

Denji eventually teams up with a government organization that hunts down particularly violent devils. There he meets Power, Makima, and Aki Hayakawa. Together they fight against both domestic and international threats related to Devils and work to take down the horrifying Gun Devil. They also discover several other human-Devil hybrids like Denji and learn more about devils and how they work.

The first part of the Chainsaw Man manga ran in Weekly Shonen Jump from 2018 to 2020. Part 2 of Chainsaw Man’s manga began in July 2022 and currently runs in Shonen Jump+. VIZ Media handles English publishing. Written and illustrated by Tatsuki Fujimoto, Chainsaw Man is one of the best-selling manga series out there and was even nominated for an Eisner Award in 2022 (with the award finally going to Junji Ito’s Lovesick).

Is There a Trailer for Chainsaw Man?
Crunchyroll has already released trailers for Chainsaw Man and MAPPA, the anime studio producing the show, has released their own trailers as well. Crunchyroll’s first trailer, released in May 2022, doesn’t feature any voices but does show the beautiful art direction and a few snips of action scenes. The second trailer, released on August 5, gives a much clearer look at the plot, as well as showing off a bit of the voice acting.

The basic concept of Denji being a human who can transform into a devil is also briefly explained via voice-over. The trailers also give audiences a look at some of the great fight sequences, as well as giving viewers an idea of the level of violence that will likely be standard in the anime. Even the simple still image of Denji, with his human body and horrifying chainsaw arms and head, is brutal and compelling.

When and Where Is Chainsaw Man Available to Watch?
A special world premiere of the first episode of Chainsaw Man was held on September 19 in Japan. The series will begin in earnest on October 11, with Crunchyroll simulcasting episodes, so viewers outside of Japan can watch as well. Crunchyroll is also dubbing the series into English, Spanish, French, German, and Portuguese.

Chainsaw Man is one of the most anticipated anime of the fall and its dark and horrific themes should make it a great watch for “spooky season.”

Who Are the Cast and Crew of Chainsaw Man?
Chainsaw Man has a talented crew animating and directing and fans have no reason to doubt that this anime will live up to the hype. Multiple members of the Chainsaw Man animation and direction staff have previously worked on MAPPA Studio’s popular and successful Jujutsu Kaisen series. The veterans of Jujutsu Kaisen include Chainsaw Man’s director Ryū Nakayama, assistant director Masato Nakazono, script supervisor Hiroshi Seko and background art director Yūsuke Takeda.

Black Clover’s Tatsuya Yoshihara is Chainsaw Man’s action director. The character designs are done by Kazutaka Sugiyama who previously worked on Mushoku Tensei: Jobless Reincarnation, and devil designs are created by Kiyotaka Oshiyama, who worked on Space Dandy. Kensuke Ushio, whose beautiful soundtracks can be heard in A Silent Voice and Devilman Crybaby, is composing the music.

The Japanese voice actors for the main cast were announced in early August with Kikunosuke Toya voicing Denji, Tomori Kusunoki as Makima, Shogo Sakata as Aki Hayakawa, and Fairouz Ai as Power. While Denji will be one of Toya’s first major voice acting roles, he has previously voiced characters in mobile games and also voiced some minor characters in the series Tokyo 24th Ward and Heroines Run the Show: The Unpopular Girl and the Secret Task. Tomori Kusunoki has an extensive voice acting resume, having voiced among other characters, Sumika Kagami in Muv-Luv Alternative, Llenn in Sword Art Online Alternative Gun Gale Online, and multiple characters in the series Wonder Egg Priority. Shogo Sakata has previously voiced characters in the game Bravely Default II, Dr. Stone: Stone Wars, SK8 the Infinity, and Attack on Titan: The Final Season. Fairouz Ai is best known for voicing the first female JoJo, Jolyne Cujoh, in JoJo’s Bizarre Adventure: Stone Ocean. The English voice cast of the series includes Ryan Colt Levy as Denji, Suzie Yeung as Makima, Sarah Wiedenheft as Power, and Reagan Murdock as Aki.

MAPPA (short for Maruyama Animation Produce Project Association), the studio adapting Chainsaw Man, is known for a variety of works including Jujutsu Kaisen, Yuri!!! on Ice, and Attack on Titan: The Final Season. These shows may not appear to have much in common, but they all feature beautiful animation and expressive character designs. The writer and illustrator of the manga, Tatsuki Fujimoto, is as interested and excited as anyone about MAPPA being the studio behind the adaptation, noting that he is curious to see his work done in MAPPA’s distinctive and elegant style. In addition to writing and illustrating Chainsaw Man, Fujimoto is also the writer of the manga series Fire Punch, which ran in Shonen Jump+ from 2016 to 2018, and wrote the one-shot manga Goodbye Eri and Just Listen to the Song, which were in Shonen Jump+ in 2022.