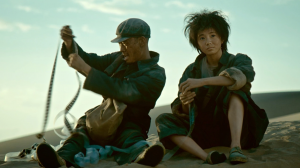 Jason Loftus’ animated documentary tells a political story about a group of Falun Gong members who hijacked China’s state TV in 2002, but that’s only part of the story.

In the strategic maneuverings of Oscar season, betting on primacy in recency is always smart. Hoping to capitalize on last year’s immense love for “Flee,” the first film to be nominated for Best Animated Feature, Best International Feature, and Best Documentary at the Academy Awards, Canada chose a politically bold animated documentary as its official entry. Apparently, nobody at the National Film Board of Canada knows about Wikipedia.

Directed by Jason Loftus, “Eternal Spring” uses beautiful 3-D drawings to animate the story of a 2002 state TV hijacking by members of Falun Gong, a religious group that was brutally censored in the late-’90s/early aughts. Drawing from childhood memories, artist Daxiong imbues the story with an emotional heft as he reframes his feelings about the religion.

Taken on its own, it’s a stirring portrait of political dissidents fighting for religious freedom — but the film makes no mention that the religion currently peddles a host of far-right csponiracy theories including QAnon, anti-vaccine misinformation, and disparages evolution, atheism, and homosexuality. Unfortunately for the film’s creative merits, art does not exist in a vacuum.

Falun Gong (or Falun Dafa) originated in the Northeastern city of Changchun, where Daxiong was born and raised. Classified as a new religious movement, the meditation-based practice blends Buddhist and Taoist traditions with qigong-style exercise (though it would later quarrel with qigong groups). Initially embraced by the Chinese government, attitudes changed as the movement gained widespread popularity at home and abroad. By 1999, the full weight of China’s state-sponsored media and government surveillance came down on the practice, causing many members to eventually flee the country.

“Eternal Spring” tells the story of the TV takeover. On March 8, 2002, a group of practitioners based in Changchun hijacked state TV to broadcast footage of Falun Gong being practiced around the world and praised as a positive religion based in love. After setting the stage for Daxiong’s personal connection to the religion, the film follow the artist as he interviews surviving members of the TV takeover, sketching their likenesses with swift accuracy. Loftus introduces the various players like avatars in a video game, which replay when their voices are heard, making it simple to follow and connect with each character. Daxiong’s drawings are then transposed into sweeping 3-D animation to tell the story, which unfolds at an engaging heist thriller clip.

Shifting seamlessly from present day interviews to lyrical animation, “Eternal Spring” offers a neat window into the making of the film while stirring empathy and connecting the story to today, with some obvious caveats. A man cries after seeing an animated version of the home he can never return to, highlighting the human toll taken in the brutality of the Chinese government. Sadly, many of the key players in the TV takeover did not survive their long prison sentences or tortures. With Daxiong’s detailed faces and the descriptive narration, the animation is able to bring them back to life, though their absence in the live portions is a somber warning.

One figure who stands out is called Big Truck. Described as a former ruffian who changed his ways after finding Falun Gong. His hulking frame fills the story with a gentle giant humility, and his heroic tale of escaping from prison is inspiring. Liang is dubbed The Mastermind, a respected local leader who organized the hijacking. A beautiful scene arises from one of his more creative protests, as banners proclaiming “Falun Gong is good” float high above the city on helium balloons. When an official pops a balloon, yellow paper flyers sprinkle down like confetti.

The film ends with a mournful postscript detailing how and where these figures perished, mostly in prison or from injuries sustained there. As their photos appear alongside their fates, it is striking to think how easily names and numbers fade into oblivion. How many people are currently suffering in Chinese prisons, and who will tell their stories? Enacted with the utmost care, “Eternal Spring” feels like a sacred reckoning, salvaging a courageous act of political protest from the obscurity of time and propaganda. But that was then.

Today, Falun Gong is known for owning and operating The Epoch Times, “a multi-language newspaper that opposes the Chinese Communist party, promotes far-right politicians in Europe, and has championed former President Donald Trump in the U.S.,” according to Wikipedia. “The Epoch Media Group’s news sites and YouTube channels have spread conspiracy theories such as QAnon and anti-vaccine misinformation, and false claims of fraud in the 2020 United States presidential election. In 2020, The New York Times called it ‘a global scale misinformation campaign.’”

“Eternal Spring” would not be the first time that Falun Gong used art to peddle its messages. Falun Gong also operates its own TV station, New Tang Dynasty, and Shen Yun Performing Arts, a U.S.-based entertainment company. All of these entities are overseen by Falun Gong founder Li Hongzhi, whose appears in the film as a trusted interview subject, despite publicly espousing views that aliens walk the earth.

The story of “Eternal Spring” deserves to be told, but truthfully — Loftus’ film, however, is a victim of the very kind of insidious propaganda the members of Falun Gong once tried to fight.