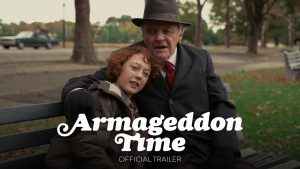 A poignant story with an ensemble cast

A biopic about a legendary personality tells you what their life was all about. But an autobiography delves deeper into what and how those people felt in their life’s journey. Before Steven Spielberg’s The Fabelmans opens in theaters everywhere, filmmaker James Gray will tell audiences a story of his adolescent years in Armageddon Time.

Another most-awaited film of the year, Armageddon Time explores family, friendship, and living the great American Dream in the 1980s, told through the lens of a teenage boy. It follows Paul Graff, whose friendship with a fellow African-American classmate, Johnny, sparks racism and family turmoil in an increasingly volatile socio-political era in the United States.

While Armageddon Time looks like a politically sensitive and conscious, ensemble drama, it is also a glimpse into a critical moment in the history of American society as well as that of the storyteller’s life. So, it looks like this story would have a lot of appeal for fans of biopics and historical fiction, not to mention fans of James Gray’s works.

Before the movie arrives at the theaters this fall, check out this comprehensive guide below to learn about everything we know so far about Armageddon Time, including the plot, trailer, release date, cast and characters, and more.

When Is Armageddon Time’s Release Date?
Armageddon Time had its premiere at the 2022 Canned Film Festival in May 2022 and earned great recognition and acclaim at the event. Now, the movie is set to have a limited theater release in the United States, on October 28, 2022, followed by a nationwide release on November 11, 2022, by Focus Features. The international release by Universal Pictures is yet to be announced.

Watch the Armageddon Time Trailer
The official trailer of Armageddon Time, released this month, proves that James Gray’s storytelling is going to be strong and reflective, once again. It’s direct and thought-provoking, not only about the characters but also about the American society under the Reagan administration.

The two-and-a-half-minute clip touches upon the key characters and the events in their lives that how they affect and are affected by the contemporary social environment. As a first look into the movie, the trailer also evokes a deep sense of nostalgia among people of that generation. It’s intimate, beautifully laid out, and portrays a delicate personal experience through moving characters, played by the movie’s sensational cast.

Despite dealing with complex and sensitive issues, the cinematography, direction, and performances prove to be phenomenal, making Armageddon Time a must-watch.

Who Is in Armageddon Time’s Cast?
Armageddon Time is not only exploring a powerful subject but does that through a stunning ensemble of actors. The cast of the period film features Anne Hathaway, Jeremy Strong, Banks Repeta, Jaylin Webb, and Anthony Hopkins in major roles.

The Black Phone actor, Repeta features as the protagonist and Gray’s fictionalized version, Paul Graff, while Strong and Hathaway star as his parents Irving and Esther Graff respectively, and Hopkins as Aaron Rabinowitz, Paul’s supportive grandfather who teach him to fight against racism. The Wonder Years’ star Webb features as Paul’s friend and classmate, Johnny. Jessica Chastain also appears in a cameo as Maryanne Trump.

Who Are the Creators of Armageddon Time?
The story of Armageddon Time is the brainchild of filmmaker James Gray who writes and directs the project. Paul’s family in the film is a fictionalized take on Gray’s own family and the events of the story parallel his own experiences when he was growing up in Queens, New York City, in the 1980s.

Gray is a reputed filmmaker and is recognized for his niche of independent films with powerful narratives. He debuted as a director with 1994’s Little Odessa, which he wrote and directed, and is best known for movies like We Own the Night, Two Lovers, The Immigrant, and his most recent and biggest project, Ad Astra.

The filming for Armageddon Time started in late 2021 and was shot in New Jersey, with cinematographer Darius Khondji, who is recognized for his brilliant work in projects like Se7en, Evita, Midnight in Paris, etc. He has also worked with James Gray in their earlier collaborations in The Lost City of Z and The Immigrant.

When is Armageddon Time Set?
Inspired by Gray’s early life, Armageddon Time is set in the 1980s, around the time of the presidential election of Ronald Reagan. The 80s was the decade of political conservatism, resulting in major social and political shifts across the nation, while society was reeling from the heat of the Cold War. In other words, the events that took place in this period shaped the future decade/s of the country and transformed world politics, and caused major global socioeconomic changes. Hence, it’s often considered a critical period of modern history.

What Is Armageddon Time’s Story?
Armageddon Time is described as “a deeply personal story on the strength of family, the complexity of friendship, and the generational pursuit of the American Dream.”

Based on the filmmaker’s personal life, the film is, in a way, a semi-autobiographical look. It follows Paul Graff, a young boy from a Jewish family, where his great-grandmother had escaped the Holocaust and settled in America. Paul befriends an African-American boy at his school and their friendship causes a stir within the family. The present racism in society tears their friendship apart, and they each go through their own emotional struggles. Paul’s parents try to push him towards a better life, but his heart refuses to abide by the system that makes him alienate his best friend. His grandfather, on the other hand, is a very righteous, anti-racist man and mentors Paul to stand up to injustice and do the right thing for his fellow man.

In a nutshell, it’s a deeply touching emotional story of adolescent kids, and their families, with their respective fights and how they deal with the social system and hold onto their relationships.