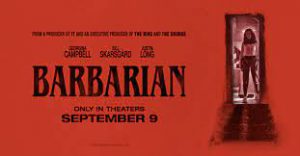 A24 couldn’t make a misleading trailer out of Barbarian?

This article discusses the plot of Barbarian.

There’s no shortage of original horror movies this year, and A24 has put out the lion’s share of the most anticipated. Between the release of the first two installments in Ti West’s X trilogy, which includes X and Pearl, A24 released Bodies Bodies Bodies and Men. And while those scored well with critics—and received positive to very positive reviews from our humble website—they failed to drive the kind of sleeper success as Barbarian.

A24 didn’t release Barbarian. Another studio-cum-merch-company called Disney, via 20th Century Studios, did. Thanks to strong word of mouth, the Mouse House expanded the film’s release from 2,340 theaters to 2,890. Expanding a movie in this economy? So why didn’t A24, Neon, Blumhouse, or any of the hippest horror studios in Hollywood put this thing out? In short: It doesn’t sound like they got it.

In a new interview with Vulture, director Zach Cregger and producers J.D. Lifshitz and Raphael Margules explain the film’s unlikely path to the Magic Kingdom. According to them, the twists and turns (i.e., the things that make Barbarian such a delight) turned studios off. Cregger made “a spreadsheet of every production company that had made a horror movie in the last 15 years,” and every one passed. Meanwhile, Vulture writes that A24 “straight-up ignored their overture.”

“They didn’t like that the movie resets on page 50,” he said. “They didn’t like that there’s a character who’s part of Hollywood. And they said nobody wants to follow a rapist for 30 pages. All of these things that people were picking on, especially the lack of a structure, were the things that excited me the most. I knew that if I were to polish those edges, I would be compromising this thing and defanging it before it had a chance.”

On paper, Barbarian seems like the kind of horror movie A24 would love to advertise. With three distinct sections, time frames, groups of characters, and twist after twist, it’s not hard to imagine an A24 trailer that plays up the atmosphere and disparate parts, tricking people into thinking they’re about to see a movie less funny than they are.

Weirdly, that’s what Disney did. The initial trailer for the film is pulled from the film’s tense opening third, which misleads the audience. Because when that reset happens, the movie very much changes course. Recently, the studio leaned into that section, releasing a trailer focusing on the Justin Long of it all and posting it on YouTube under the title “Justin Long’s New Movie.”

Ultimately, producer Raphael Margules claims that Disney “completely understood from the beginning how to market this thing.” Disney knew word-of-mouth would attract audiences. “They talked about how they want this movie to feel like a ‘discovery.’ They implanted that sense of creating something in the audience.”

Thankfully, the surprises of Barbarian didn’t let audiences down. Specifically, that big old momma that forces Justin Long to drink from a giant baby bottle is now the most beloved character in America. Maybe that’s what turned off A24.